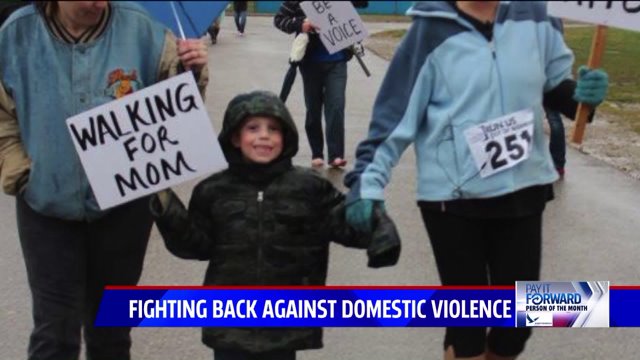 A 9-year-old boy in Battle Creek is raising thousands of dollars to help victims of domestic violence.

BATTLE CREEK, Mich., -- Izaak Oldenburg may be young, but he knows how important it is to put an end to domestic violence. Since the age of three, he's been raising money and awareness to help victims of domestic abuse, by taking part in a fundraiser called "Walk a Mile in Her Shoes". The event benefits area shelter S.A.F.E. Place.

"At first, I just thought, oh here's a family with a young son and they're here to support S.A.F.E.Place, and they're sending a great message. Little did I know what a dynamo Izaak would turn out to be for us," explained Jennifer Fopma, Executive Director of S.A.F.E. Place. "Every single year, we have an award for whoever raises the most money for 'Walk a Mile in Her Shoes', and every single year he's been a winner of that award."

Oldenburg, 9, has raised more than $7,300 dollars since he first participated in the walk in 2009. This year, he brought in more than one thousand dollars for the October 24th event.

He collects spare change year round and also seeks out pledges and donations from family, friends and members of the community.

During the walk, male participants are encouraged to wear high heels and other attire to literally "walk a mile" in a woman's shoes. Oldenburg will often don a wig and dress for the event. He doesn't mind looking silly for such a serious cause. Both his grandmother and mother are survivors of domestic abuse.

"He's going to walk until there's no more violence, as long as there's violence, and he's able, he'll be walking," said Terry Oldenburg, Izaak's Grandmother. "He's an achiever, a go-getter. And it makes me proud."

Izaak confirms his efforts are far from over, saying he will keep going "Until violence stops. If it don't, I don't."

As the October Pay it Forward Person of the Month, Izaak will receive a $500 dollar check, courtesy of Independent Bank. He tells FOX 17 he plans to donate the entire amount to S.A.F.E. Place.

Know someone who FOX 17 should feature as our next Pay it Forward Person of the Month?  Nominate them here.

Meet Dawn Sagryn, our September Pay it Forward Person of the Month.