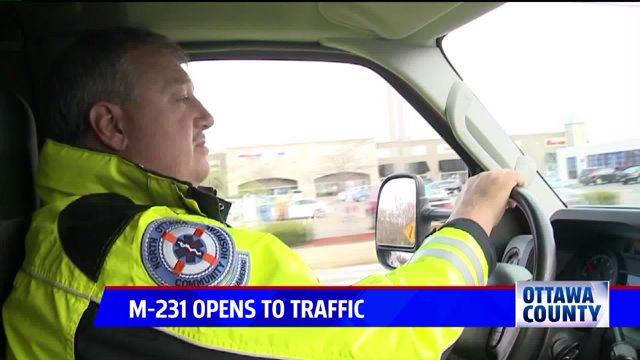 CROCKERY TOWNSHIP, Mich. - After more than 20 years of planning and then construction, a new highway has opened in Ottawa County.

The new seven miles of roadway runs from Crockery Township in the north, over the Grand River, to Robinson Township.  It runs from the I-96/M-104 interchange in Crockery to M-45, Lake Michigan Drive on the south end.

The Michigan Department of Transportation says the highway will alleviate congestion in other areas of the county and make it faster for first responders to get to emergencies.

"The sooner we provide care, the better off a patient is going to be.... whether it's cardiac problems or a sudden illness, or strokes," Billett said.

Gary Dreyer is the fire chief in Crockery Township.

"Minutes are really valuable," he said.

Dreyer explained that mutual aid with Robinson Township (directly to the south) will help greatly. The two towns are now joined by M-231 with a bridge crossing the Grand River.

"We've already done some basic training, briefing our officers on [the partnership], and we are planning actually, next week having a joint training session with Robinson Township."

The road has a 55 mph speed limit.