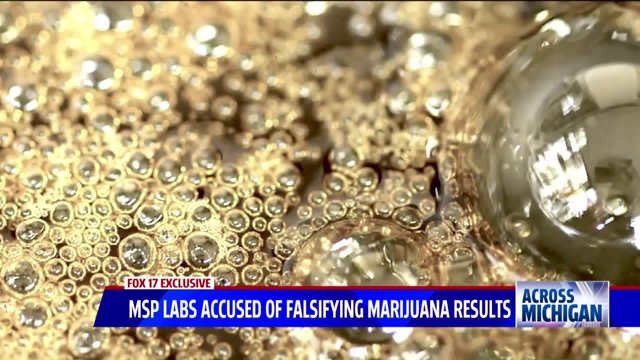 GRAND RAPIDS, Mich. – First on FOX 17, we broke serious allegations that state police crime labs are being told to falsely report marijuana test results. This is resulting in misleading lab reports that an attorney claims creates felonies without real proof.

Komorn called this a “perversion of science,” and “crime labs turned crime factories:” accusations that politics are trumping forensic science by escalating misdemeanor marijuana charges into felonies without proof.

It’s torn one Spring Lake family to pieces: a 6-year-old son taken away from his parents 14 months ago, in part, because of a disputed felony.

Since September of last year, Max Lorincz has been cheated of carefree moments with his son, Dante. Afternoons of uninterrupted fun have morphed into supervised visits.

A card-carrying medical marijuana patient, Lorincz is caught between doctor’s orders and a judge.

For years he has been ingesting marijuana oils for serious stomach issues and pain after a debilitating back injury. Last year, during an unrelated emergency, a cop walked into his home finding a “smudge” of butane hash oil.

His medicine got him in trouble, and he was charged with a misdemeanor for having marijuana. But he has a medical marijuana card, which should protect him for having what’s called “usable marijuana,” under the Michigan Medical Marijuana Act.

So the charges could have been dropped, but that is not what happened.

The Ottawa County Prosecutor charged Lorincz for having a schedule 1 synthetic drug; that is no longer a misdemeanor, it is a two-year felony.  Komorn calls it a “bogus crime.”

"When you have a laboratory that is looking at a substance and reporting it in a way that makes it a schedule 1 instead of the marijuana they know it is, it's creating a crime,” said Komorn.

What Lorincz had is a marijuana extract: butane hash oil, made by filtering butane through the plant, extracting the cannabinoids, or chemicals unique to marijuana, namely THC, the plant’s most psychoactive ingredient.

“In this particular case a quantitation was not done, and therefore I could not conclude whether or not it was hemp, you're correct,” said William Ruhf, the MSP forensic scientist who completed Lorincz’s lap report.

Ruhf wrote this lab report, and then testified in April that he could not determine if this hash oil was natural or man-made. Again, this is the difference between a misdemeanor and a two-year felony.

Jay Siegel, a chemist with a PhD and the former MSU Forensic Science Director, disagrees.

“Yes, this is a preparation of marijuana. It was extracted from marijuana,” Siegel said.

Siegel told FOX 17 Lorincz’s sample, based upon the lab report, is natural marijuana.

He pointed out in this lab report’s data several tell-tale signs of the natural plant: a brown color, and several cannabinoids, including cannabidiol, cannabinol, and THC.

He said it is unreasonable to say this is man-made.

“It’s much easier to get marijuana and extract it; the syntheses are quite sophisticated,” said Siegel.

Then, why are state police forensic scientists writing “origin unknown” on reports like this?

"The substance that we're talking about has always known and been reported as from the lab as being marijuana, they know it,” said Komorn. “The lab is being forced, compelled, the policy changed to do this a certain way, to report this as a synthetic THC.”

“They also know that by reporting it as synthetic THC, they are stating that they can prove that it came from a synthetic source, as opposed to a natural plant source. This is a lie,” said Komorn.

Komorn said this is the result of a recent MSP Forensic Science policy change, which is not based in science. He obtained months of emails between 2013 and the present through the Freedom of Information Act.

They expose a lengthy debate among MSP forensic scientists, directors, and prosecutors associated with the Attorney General’s office, all regarding a specific procedural change for marijuana lab reports after 2013.

"The law enforcement community is focused on criminalizing medical marijuana patients, creating crimes in a crime laboratory that gives them no integrity,” said Komorn.

First, a crime lab technical leader wrote, “although THC found in foodstuffs and oils is most likely a marijuana extract... our scientists cannot determine if it’s marijuana without seeing any plant material.”

But, Siegel and Komorn already said this is not true.

Emails show after meeting with the Prosecuting Attorneys Association of Michigan (PAAM), a lab leader turns one prosecutor’s opinion into policy.

“That is my opinion, THC is a schedule 1 drug regardless of where it comes from,” Ken Stecker, a prosecutor who works with the Prosecuting Attorneys Association of Michigan (PAAM), which is affiliated with the Attorney General’s office, wrote in an email.

But, according to the law, where THC comes from does make a difference.

"The most damning evidence is that their own forensic scientists calls them out that they can't do it based on forensic science, and yet they do it anyways," Kormon said.

MSP forensic scientist Scott Penabaker wrote his concern to colleagues: “By going out on that limb and calling it THC, you jump from a misdemeanor to a felony.” He goes onto write, it is “highly doubtful any of these medical marijuana products we’re testing are synthetic.. That’s completely impractical.”

Then, controlled substances unit supervisor Bradley Choate wrote his heated opposition, including that identifying THC gives scientists two choices: one, marijuana possession as a misdemeanor; or two, synthetic THC possession, a felony; he wrote there is not a third choice.

But if lab reporting goes on like this, Choate wrote: “This could lead to the wrong charge of possession of synthetic THC and the ultimate wrongful conviction of an individual. For the lab to continue this possible miscarriage of justice would be a huge black eye for the division and the department.”

“You don’t just call up the Attorney General’s office and ask them what they think because they’re not scientists,” said Former Director of MSP Forensic Science John Collins.

Collins served as the director of MSP Forensic Science from 2010 until he said he surprised the department with his resignation in 2012 in part, because of these issues.

“In my experience, it was just a nonstop political game,” said Collins.

Collins reviewed documents in Lorincz’s case, including another email chain from Choate to the department citing their professional training materials.

Choate wrote that their conclusions are based on the evidence, not on political pressure, or other outside influences. Then he wrote, “whether or not an individual has a medical marijuana card is immaterial to how we report out our results.”

This was in response to another email, from MSP lab director Jim Pierson who wrote that lab tests from THC waxes and oils are coming back as marijuana, so they cannot arrest people.

Then Pierson wrote, “Is there a way to get this changed? Our prosecutors are willing to argue that one speck of marijuana does not turn the larger quantity of oil/wax into marijuana.”

“Any time that scientists, or administrators of scientific operations, if they would intentionally try to create ambiguity to create a political advantage is beyond unacceptable,” said Collins.

When FOX 17 reviewed some emails obtained through FOIA with Collins he said, “That doesn’t surprise me.”

Michigan State Police Public Affairs and the Prosecuting Attorneys Association of Michigan’s president responded to FOX 17, deferring to each other.

State police public affairs said, it is up to the prosecutors to charge crimes, and lab policy was changed to add the statement “origin unknown” when it’s not possible to determine if THC comes for marijuana or is synthetic.”

Then the PAAM president wrote, it is up to the crime labs to report science. Quote, “any accusation that the lab and PAAM are directing lab personnel to report crimes without evidence is untrue.”

"There is some wrongdoing going on, that they know that it's wrong, and they continue to do it otherwise,” said Komorn.

And Siegel, who is also a former professor of many of these MSP employees, urges them to uphold the integrity of science.

“What I would say to these people is get yourselves together,” said Siegel. “Get them all together to agree that this is bad science.”

Meanwhile, Lorincz is only allowed to visit Dante twice per week. He said he will not stop fighting for custody, and for the right to use the medicine he says does not hurt his body like pharmaceuticals.

“If nobody stands up for this and it just keeps going the way it is, how many more people are going to get thrown under the bus just for using their prescribed medicine? It's just ridiculous,” said Lorincz.

Thursday evening FOX 17 caught up with Attorney General Bill Schuette at another event.

When FOX 17 asked specifically about these emails that suggest prosecutors within his office are manipulating the way crime labs are reporting marijuana, and what his involvement is, Schuette answered:

“We’re in the middle of an investigation so I really don’t, I can’t comment one way or the other.  But, we have an outstanding group of people that work very hard to make sure we enforce the law and defend the Constitution of Michigan.”

Schuette also told FOX 17 his office is “always very open, very transparent, and we have a great group of lawyers who work very hard for the citizens of Michigan.”

An evidentiary hearing for Lorincz’s case was originally set for Nov. 5, but it was adjourned. The Ottawa County Prosecutor filed a motion suppressing the defense’s subpoenas for 13 people, many of whom are quoted from the emails in question.

The defense told FOX 17 they plan to re-file motions and set another hearing likely in December.

At this point, it may be up to another court to address the underlying allegations outside of Lorincz’s case.

Meanwhile, there is pending marijuana legislation statewide that would expand the definition of “usable marijuana,” according to the Michigan Medical Marijuana Act, to include concentrates and extracts; for example, House Bill 4210. This would explicitly protect people like Lorincz from charges.

We will stay on top of this case for you, and continue to investigate.