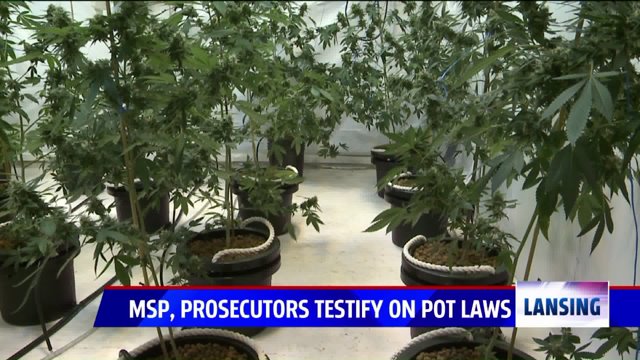 LANSING, Mich. – Marijuana is becoming a stickier legal issue in Michigan, leaving many medical marijuana advocates to question the way law enforcement and prosecutors want to change pending legislation that would regulate dispensaries and legalize marijuana concentrates, like edibles.

In the meantime, the Prosecuting Attorneys Association of Michigan (PAAM) President Michael Wendling said they spearheaded an effort seeking to close the gap between charges of possessing synthetic THC, a two-year felony, and marijuana, a misdemeanor. Wendling told FOX 17 they are working to change policy to make both charges a one-year misdemeanor.

“There is some movement afoot, and it was afoot long before this issue came up, to bridge that gap between synthetic marijuana and plant based marijuana, because it is difficult to tell the difference,” said Wendling.

However, the hearing agenda only listed Senate Bills 508 and 509 about cyber revenge, which took only a few minutes of the hour-long hearing. The medical marijuana bills on the other hand, were unlisted and lasted the majority of the hearing. Testimony of House Bills 4209, 4210, and 4827 were followed by no time for public comment.

“It’s a perversion of process and it’s inappropriate,” said Rick Thompson, board member of Michigan’s chapter of the National Organization for the Reform of Marijuana Laws (NORML).

“This is now the third or the fourth meeting of the Senate Judiciary where citizenry has not been allowed to speak, and yet industry or law enforcement representatives rule the day.”

Officials voiced concerns regarding pending legislation that would track and regulate dispensaries, and then legalize “marijuana-infused products,” like medibles and topicals: medicines card-carrying patients don’t have to smoke.

“I think we’ve reached the position of the wild, wild west out there right now: apparently caregivers are selling their overages to these dispensaries, there’s no licensing, people don’t know what they get,” said State Senator Rick Jones, (R) 24th District.

Jones and others gave uneasy testimonies touching on a list of worries, including the dangers of making hash oil, wanting the amount of THC in products labeled, and secure transport of products.

“What we want to avoid is the private delivery services, ‘Uber Weed,’ insert random name here, people that are delivering as dispensaries to patients or caregivers,” testified MSP Sgt. Amy Dehner.

Another major point of contention to medical marijuana advocates like Thompson is the majority of testimony was based on the idea of cutting out the caregiver altogether.

“We don’t have an answer for the overage, other than to either phase out or completely get rid of the caregiver model,” said Dehner.

“We’ve seen law enforcement use a lot of different scare tactics in order to intimidate legislators and citizens into participating or into banning distribution centers; this is just more of the same,” said Thompson.

“I’m very distressed to see that the bills are being warped into something that would potentially eliminate the caregiver system, which is a baseboard of our program since 2008.”

Wendling said it’s up to the county prosecutor to interpret state statute and case evidence. But as FOX 17 is reporting out of Ottawa County, the law’s grey area has caused some people using concentrates like hash oil, namely defendant Max Lorincz, to be charged with felonies they and attorneys argue are unfounded.

“It’s unethical for a prosecutor to charge a case that they don’t have the evidence or reasonable likelihood of prosecution,” said Wendling.

“I can’t tell you that the Ottawa County Prosecutor, or my county, or any county what their conclusion is on that ultimate issue. That’s why we have juries to make that decision, and there are cases that could go either way.”

Then, the potentially huge development for future marijuana cases: again Wendling told FOX 17 PAAM is working to charge synthetic THC cases as marijuana. Both possession charges would turn into a one-year misdemeanor, not a two-year felony.

“That is underway: to try and deal with that issue that “origin unknown” becomes a problem for prosecutors to apply the right statute,” said Wendling.

Wendling said he was unsure of how far along in this process they actually are in adjusting legislation, but that it’s “underway.”

Becker also said, “The state lab is its own entity. There is no grand conspiracy.”

Stay with FOX 17 for the latest on pending marijuana legislation as well as the investigation into court cases involving the issue of marijuana crime lab reporting.