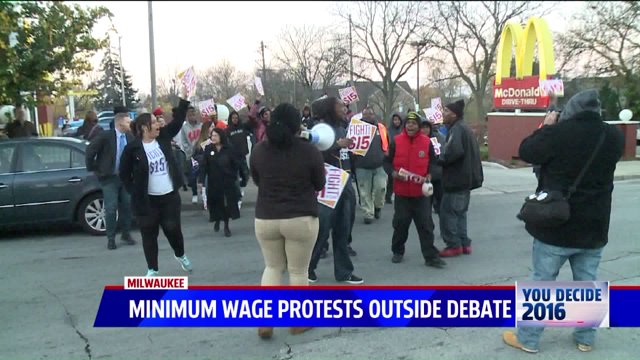 FOX 17`s Josh Sidorowicz reporting from Milwaukee ahead of the Nov. 10 GOP debate

MILWAUKEE — Protesters hoping for a bump in the nation's minimum wage rate used Tuesday's GOP debate as an opportunity for coordinated nationwide rallies.

Supporters are hoping to push the minimum wage issue into the forefront of the 2016 election.

Workers from 270 cities were expected to walk out on their jobs — demanding a living wage of $15/hour and the right to unionize.

At the same time, thousands of protesters are expected to rally Tuesday evening at the GOP Milwaukee debate outside of the Milwaukee Theatre.

The group representing fast food workers has been successful in influencing cities like New York, San Francisco and Los Angeles to establish a minimum $15 wage.

FOX 17 asked longtime FOX News host Neil Cavuto, who is co-moderating the primetime debate, whether the protests nationwide will have any influence of questions asked to candidates.

Debate organizers said the questions during Tuesday night's debate will hinge heavily on jobs, taxes, salaries and the economy.

The 'under card' debate begins at 7 p.m. while the top-eight polling GOP candidates will debate beginning at 9 p.m. Both debates will air on FOX Business Network and will be streamed for free online.

FOX 17s Josh Sidorowicz is the only West Michigan reporter in Milwaukee and will have live reports from the debate throughout the week.