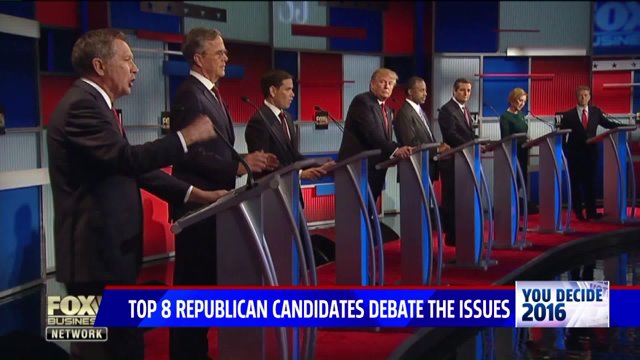 As the first primaries creep ever closer, candidates are feeling the pressure to rise above the pack and prove their electoral viability.

Each candidate came in with different marks to hit. Jeb Bush needed a game-changing performance. Marco Rubio and Ted Cruz wanted to maintain their momentum. And Rand Paul wanted to get into the act.

Here's how they fared:

Rubio was once again the debate's maestro -- hitting all the right notes and not once appearing to bend under pressure.

The Florida senator skillfully weaved his personal biography as the son of immigrant parents as he answered almost every question he fielded.

He also flashed his foreign policy chops and seized the opportunity to set up a contrast between himself and the less mainstream non-interventionist views of his opponent, Kentucky Sen. Rand Paul.

"I know that Rand is a committed isolationist," Rubio needled, before offering a deftly handled rebuttal to Paul's questioning of how spending billions on the U.S. military was conservative.

"We can't even have an economy if we're not safe," Rubio argued. "Yes I believe the world -- I don't believe, I know the world is a safer and better place when America is the strongest military power in the world."

As during most of Rubio's responses -- the audience roared in approval.

While Ben Carson did have to answer one question about the controversy that has swirled around his campaign in the last week, Rubio did not have to field the rolling questions about his finances, notably his use of a Republican Party credit card for personal expenses.

The Texas senator gave another classic Cruz performance on Tuesday night, one that could serve to further his steady rise in the polls -- and the rising chorus of pundits viewing him as the eventual conservative alternative to whichever establishment candidate emerges in a two- or three-person race.

The firebrand conservative slammed critics who dub his hardline position on illegal immigration as "anti-immigrant," calling that "offensive"; he staked out the middle ground as Rubio and Paul argued for opposing degrees of American intervention in Middle East conflicts; and he played to his base by slamming moderate, establishment Republicans.

"The Democrats are laughing -- because if Republicans join Democrats as the party of amnesty, we will lose," Cruz said.

He hit one snag reminiscent of a memorable 2011 debate moment when Rick Perry forgot the name of the third agency he would eliminate. Cruz, naming five federal agencies he would abolish, named just four -- twice naming the Department of Commerce, leaving the Department of Education off of his list.

The retired neurosurgeon is sticking with what works, offering supporters more of the same mild-mannered, reserved demeanor that has rocketed him into a dead heat with Trump.

Carson's most notable moment is one that is sure to please his supporters, who have been devouring his upbraiding of the mainstream media over the course of more than a week of questions about crucial elements of his inspirational biography.

"Thank you for not asking me what I said in the 10th grade," Carson said to laughter as Fox Business moderator Neil Cavuto asked him about the impact of the media scrutiny on his campaign.

"We should vet all candidates. I have no problem with being vetted. What I do have a problem with is being lied about and then putting that out there as truth," Carson proclaimed. "People who know me know that I'm an honest person."

His closing statement was also a memorable break from the feisty tenor of the evening, coming right after Rubio and Cruz trumpeted their campaign websites. Carson, softly showed why he is connecting on the trail.

"In the two hours of this -- of this debate, five people have died from drug-related deaths, $100 million has been added to our national debt, 200 babies have been killed by abortionists, and two veterans have taken their lives out of despair," he said. "This is a narrative that we can change, not we the Democrats, not we the Republicans, but we the people of America, because there is something special about this nation, and we must embrace it and be proud of it and never give it away for the sake of political correctness."

The former Florida governor improved, but he was still upstaged by the competition.

After his widely panned debate performance last month, Bush got to work. He hired a media coach, got angrier on the campaign trail and attempted to reboot his struggling campaign with a new slogan: Jeb Can Fix It.

The takeaway? Jeb Can (Sort of) Fix It.

Bush forced his way into more speaking time, got his points across more clearly and concisely, and -- perhaps most importantly -- didn't pick a fight he wasn't going to win (against Rubio).

But he also still appeared awkward at times and let up too easily where other candidates would have pressed further, adding to the impression that he lacks the verve to lead his party into the general election. And with several other candidates -- namely Rubio -- soaring above the field with exceptionally strong debate performances, Bush's slightly above-average performance just doesn't rank in the same category.

Bush's two best moments came when he confronted Trump. Bush jumped in as Trump suggested the U.S. should stop being the policeman of the world to say that the billionaire "is absolutely wrong on this."

And on Trump's plan to deport the estimated 11 million undocumented immigrants living in the U.S., Bush said "it's just not possible and it's not embracing American values" -- drawing more applause.

As he did in the last debate, Trump once again showed that he can be one man on the stump before a crowd of zealous supporters, and another when he's debating a range of issues before a national audience.

Trump's tone was measured and his message was largely policy-centric. Even when he faced pointed criticism and pushback from his rival candidates -- notably Ohio Gov. John Kasich, former Florida Gov. Jeb Bush and Carly Fiorina -- Trump didn't get personal. He challenged their contentions and stuck to his message: Yes, the federal government should deport all undocumented immigrants and build a wall, he insisted; No, the U.S. should not be the world's policeman.

And while sticking with the debating style he first debuted at the CNBC debate, Trump even appeared to show some improvement -- delivering longer and more in-depth responses to questions on everything from the economy to foreign policy.

But some of Trump's persona bled out. When Carly Fiorina tried to get a word in, declared: "Why does she keep interrupting everybody?" The crowd wasn't happy and booed.

The former Fortune 500 CEO reclaimed her spot as one of the field's most effective and hard-hitting debaters --- a quality that first hoisted her onto the main debate stage after a stand-out performance in the cycle's first primary debate.

Fiorina played to her strengths as a business executive, status as an outsider and displayed her command of the biggest foreign policy issues confronting the U.S.

Her sharp-elbowed strategy produced results as she nabbed her most impressive moment of the night when she jumped into a foreign policy debate between Trump and Bush -- piling onto Bush's critique of the brash front-runner before putting forward her own credentials for the commander-in-chief post.

Skipping from country to country in the Middle East after laying out specific steps she would take to bolster the U.S.'s standing in the face of Russian aggression, Fiorina came away breathless, over time -- but wildly successful.

But there's a big footnote: Her previous strong debate performances didn't yield sustainable results because she failed to capitalize off her gains in the polls. She'll need to have a strategy ready this time.

A steady stream of interruptions.

The Ohio governor didn't miss an opportunity to jostle his opponents and the moderators for more speaking time.

As Trump defended his plan to deport all undocumented immigrants living in the U.S., Kasich looked to get in a word edgewise.

But it's a strategy that Kasich has applied to previous debates -- both taking on Trump and jumping in at every opportunity -- without earning any real upward movement in the polls following the last debate.

The Kentucky senator with strong libertarian-leanings showed up at the Republican debate Tuesday night -- diving into an impassioned defense of his foreign policy views, challenging the hawkish instincts of the Republican Party and most of his fellow contenders.

Paul hasn't shined through in the previous debates, but a relatively long back and forth with the surging Rubio gave Paul the face time and the speaking time he needed to make his mark.