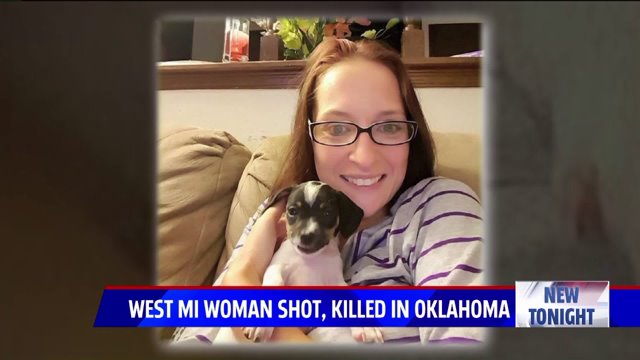 KENT CITY, Mich. — After Rebecca 'Becky' Sisk was shot and killed in Oklahoma last week in what police are calling a domestic dispute, her family in Michigan is now struggling to pay to bring her home.

Her husband, Humberto Diaz, 30, is now behind bars, charged with first degree murder.

Sisk, 26, moved to Oklahoma six years ago after growing up in Cedar Springs, friends and family told FOX 17.

Her loved ones are now hoping to bring her back to Michigan to lay her to rest.

"We're just trying to raise the money to get her here to say our goodbyes," said Rebecca Sisk's best friend, Audreanna Martinez.

Family and friends of are hoping to raise more than $1,000 by Nov. 17  through a GoFundMe page to hold a service here in West Michigan.

"She was always fun, loving, caring, no matter what," said Sherri Sisk, Becky's sister-in-law. "If she was having a bad day, she would talk to you about her problems. She was a great mother. We always had a lot of fun together,"

Diaz called police on Nov. 8 and admitted to shooting and killing his wife, according to our Tribune sister station KFOR.

"What happened was he shot her, went outside and called the police and said, 'I just shot my wife,' and waited for them to come," Sherri Sisk told FOX 17.

Police in Oklahoma said it wasn't the first time they had responded to the home for disturbances, KFOR reported. "I think we do have some previous calls for some mental health issues and some domestics," said Oklahoma City Police Department Lt. Alan Burgett.

Family said they feared things might eventually escalate to this.

"I started to get really nervous. She told me things weren't the greatest between them, but she loved him and wanted things to work," Sherri Sisk said. "I thought she would be smart enough to get out of things started getting bad."

Becky and her four kids.

Family said Rebecca Sisk was a mother of four and had celebrated her youngest daughter's first birthday just three days before she was killed.

"I couldn't imagine what they're going through," said Sherri Sisk. "I live every day for my children, and for them not to have a mom, [it] just hurts."

Rebecca Sisk's four kids were not home at the time of the shooting, KFOR reported.

"I just don't understand how this could happen to such a good person," said Martinez.

Oklahoma City Police are still trying to determine an exact motive in the case.