Transparent government? Why Michigan citizens are left in the dark 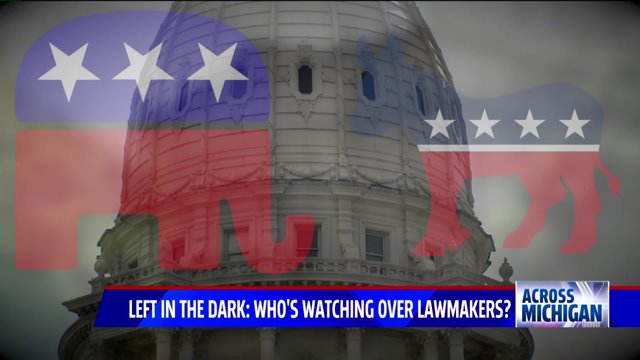 LANSING, Mich. — Under Michigan law, anyone has the legal right to request records from public officials, and more often than not those public officials are required by law to give up that information. But there remains a few high-ranking officials who aren't subject to that law, including the governor and even state lawmakers.

But pressure is growing to change the law.

A study released in early November from the Center for Public Integrity, the country's oldest and largest nonpartisan, nonprofit investigative news organization, ranked Michigan dead last in the country for governmental transparency. The ranking is based on scores assessing access to public information and legislative accountability. The score doesn't reflect the level of corruption within state government but instead assesses the laws in place that are intended to prevent corruption.

"We have all sorts of social media, a huge ability to inexpensively communicate information and provide public records to citizens, and instead the movement has been toward hiding stuff."

“Michigan needs to have an open and transparent government," said Jane Briggs-Bunting, who sits on the board of the Michigan Coalition for Open Government, a group that advocates for better open records laws. The coalition supports the efforts of the National Freedom of Information Coalition.

Briggs-Bunting said she receives multiple calls and emails from across the state every week from citizens trying to get information under the state's open records laws, specifically the Freedom of Information Act.

“We listen to a lot of complaints, we get a lot of inquiries, and we respond the best way we can by giving citizens advice on how to get information," she said.

It's information—public records like emails, salaries and even police reports—that every citizen, with some exceptions, has a right to under the law.

However, the law remains silent on whether the state legislature is also exempt, which is why a 1986 opinion  from Michigan attorney general at the time, Frank J. Kelly, said "the Legislature has exempted state legislators from the provisions of the Freedom of Information Act."

“The attorney general, when asked by a legislator, issued a legal opinion. It is just that: an opinion," Briggs-Bunting said. “The legislature should, as a role model for the rest of the state, be operating under the Freedom of Information Act, and they’re not. They’ve chosen not to."

The 1986 opinion has not been challenged in court.

Only Michigan, Massachusetts and Utah have blanket exemptions for the governor and legislature.

After researching open records laws in all 50 states, FOX 17 learned Michigan is one of just two other states—Utah and Massachusetts—where both the governor's office and the legislature is exempt, either through law or some combination of rulings from courts or attorney general's offices.

Just a handful of other states exempt either the governor's office or the legislature, but not both. While the remaining three dozen or so states have no blanket exemptions in place.

You want how much?

Some argue it's not just the law that's limiting access to public records but excessive fees being charged by agencies to fulfill requests.

In October, the liberal-leaning advocacy group Progress Michigan claimed Michigan Attorney General Bill Schuette was advising his office to use a "fee approach" to deny information requests. The group provided evidence to media of an email obtained through a FOIA request contained reference that that was meant to be redacted that instead revealed that "per advice from the AG" the response to the FOIA request should carry a $52,000 fee.

In June, FOX 17 received a bill from the attorney general's office for more than $110,000 on response to a FOIA request made by FOX 17's Darren Cunningham during his Problem Solvers investigations into the state's unemployment agency.

“These are the people’s records. We’ve already paid for them with our tax dollars," Briggs-Bunting said. "These people are all public employees."

This July, a new law went into effect  placing a cap of 10 cents per page on the amount government agencies can charge on FOIA requests. The new law also allows people to sue if they request records and believe they've been overcharged.

Zoe Clark, a reporter with Michigan Public Radio, has been following the efforts to reform the state's FOIA laws for several years. As a journalist, she said, she understands the need to have access to information from public officials but can also acknowledge there's validity in the argument from some officials who feel certain information shouldn't be public.

“Look, there are big decisions about big issues that are being made, and there are some times when those need to be made by lawmakers without being concerned how every little meeting or every little thing could be taken out of context," she said. “It’s not that I think folks are pushing for FOIA reform so that it can be ‘gotcha’ or ‘ah-ha moments’ but to better understand how elected officials and folks in power are representing the people who put them in power."

But some lawmakers agree reform is needed, including House Minority Leader Tim Greimel who, along with Rep. Jeremy Moss, D-Southfield, proposed changes in September.

“The bottom line is that government is here to serve the people, and it should be transparent to the people," Greimel told FOX 17.

Republicans have supported reforms in the past, including Lt. Gov. Brian Calley, who introduced his own legislation when he was still a lawmaker in 2009.

Greimel and fellow Democrats are the latest to push for reform, citing the recent fiasco involving disgraced former state Reps. Todd Courser and Cindy Gamrat. “It's a reminder of how important it is to hold government accountable," Greimel said. "We hold local governmental bodies, cities, school boards and counties accountable under the Freedom of Information Act, and those laws should apply every bit as much to the leaders in Lansing.”

When asked about it in the past, Republican Gov. Rick Snyder has argued his administration already goes out of its way to provide information when it's request, even when it isn't required. “I’m open to having a discussion on the topic," Snyder told FOX 17 when pressed on the issue last week. "In some ways, there’s a balancing act about how you brainstorm and come up with ideas, and we want a place where we can come up with creative ideas. But as we go through that process, we try to communicate with the public.”

Snyder pointed to the state's budget as an example of the work his administration has done to make information more accessible by creating online dashboards and score cards to provide citizens the ability to measure how the state's financial progress.

Briggs-Bunting doesn't buy the argument that blanket exemptions are necessary.

“The issue is, this is 2015," she said. "This is an era where we have online, we have all sorts of social media, a huge ability to inexpensively communicate information and provide public records to citizens, and instead the movement has been toward hiding stuff.”

As it has in the past, the current reform legislation has been stalled in committee for several months.

Interested in submitting your own FOIA request? While there are over 10,000 public bodies in Michigan subject to the state's open records law, submitting one does not require a specific request form, just a written request that must describe “a public record sufficiently to enable the public body to find the public record.”

Patience is important, because the public body at the other end of the request is allowed five business days to respond. However, with notice during that time frame, an agency can extend the deadline by an additional 10 business days.

Be mindful of exemptions. More information on frequently asked FOIA questions can be found here.