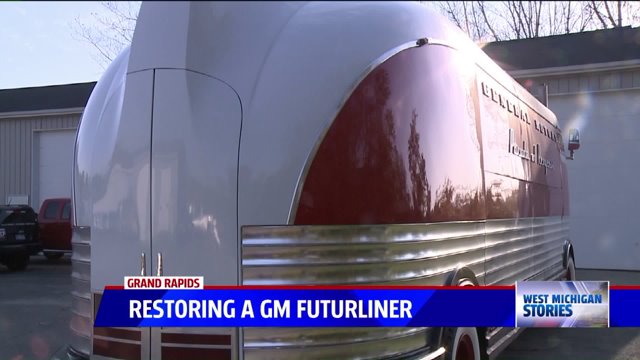 GRAND RAPIDS, Mich. – When someone first told me about the General Motor’s Futurliner, I had never heard of it. A gigantic red bus built back in 1939 and taken on the road across the country to showcase the products that GM made. Yes…in the early days they made more than just automobiles. Turbine jet engines, refrigerators, and something in the extreme infancy stage known as television.

The idea of the Futurliner was born from necessity and stemmed from the 1939 New York World’s Fair. For those of you that recall, TV was first demonstrated there. GM executives were wondering what in the world they were going to do with all the displays they had after the show ended. The team came up with the idea of building 12 large, red, buses that would house many of the products they built. These buses, or Futurliners would travel in a convoy across the country from city to city showcasing GM’s footprint in the manufacturing world.

The Futurliner was a huge success when they hit the streets in 1940 and 41. People flocked to see what this thing called television was and how it was possible to send a picture over the air waves. Their latest model production automobiles were also part of the convoy.

By 1942 the Futurliner, as successful as it was, was taken off the road and moth-balled due to the war effort. American companies were concentrating on making tanks, ammunition, and other military support equipment. It wasn’t until 1953 the that Futurliner was brought back out and completely restored, refurbished, and updated. Unfortunately, it wasn’t as popular the second time around. Most American households had television sets, and people were getting out and doing other things. They had no time to see GM’s product line.

In the late 1990s a group of volunteers visited a museum in Auburn, Indiana where one of these old Futurliners had been parked…simply rusting away for years. They decided to bring it back to West Michigan, to Beaver Dam to be exact, and spent the next seven years restoring and refurbishing it to its original 1953 condition. Hence, the term known as the miracle of Beaver Dam!

The group spent countless hours completing the arduous restoration task. They even obtained permission from GM to have special tire molds made at a cost of around $35,000 to recast the original tires for the Futurliner (with the GM name) and not have to pay royalties.

These days the Futurliner can be seen in parades and special events and still travels around the lower 48 states and Canada. It’s many trailered to its destination, then driven locally with its original 302 six-cylinder GMC engine, similar to what was placed in military vehicles at the time.

Its huge bay doors on the passenger side are driven open and closed by a special generator, and the inside houses several vintage items and displays from the past. Inside the driver’s cab you’ll find one main seat in the center with two more located directly behind the driver where back-up drivers would sit and change off for the long over-the-road haul as the convoy proceeded from city to city.

During the winter months the Futurliner is typically housed in the museum of its owners in Auburn, Indiana called the National Automotive and Truck Museum of the United States. You can click here for much more on the restoration project on what’s known as Futurliner #10.

A beautiful complete book and DVD are available if you desire more information on this blast from the past of Michigan’s motor history. Click here.

Got an idea for this kind of a West Michigan Story? I’d love to hear about it. Email me at Kevin@fox17online.com. I’ll say thanks in advance and we still have many more stories to tell!