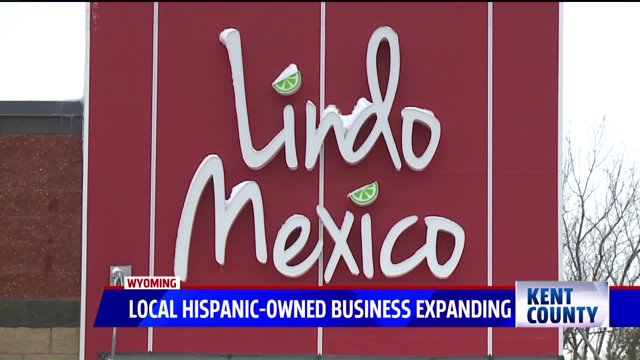 WYOMING, Mich. — West Michigan is now home to some of the largest Hispanic populations in the entire state, and several Hispanic-owned businesses are expanding to keep up.

Lindo Mexico restaurant, which has been a mainstay on 28th Street for nearly 15 years, plans to open a new, larger location in December farther west on 28th Street.

Gricelda Mata, who owns the restaurant, immigrated from Mexico with her family when she was just 11 years old. While immigration remains a hot debate topic nationally, Mata says she would've likely never had the success she does now had it not been for immigrating to the U.S.

“Of course we would like to find what we want and need in our own country, but sometimes we can’t so we go look for it," Mata said. "I think I’m a good example that we don’t come here to do harm, we come here to work hard.”

Mata's said her father originally owned a restaurant, but she never expected she'd one day enter the business. Now, she and her brother operate Lindo Mexico together.

“It’s not what I thought I wanted to do," she said, adding she'd originally thought she would be an attorney. "It just happened and I realized throughout these years, I wouldn’t like to be doing anything else.”

In the 15 years Mata's restaurant has been operating and growing its customer base, the city's Hispanic population has grown right along with it, more than doubling, according to data from the U.S. Census Bureau.

The decision to expand the restaurant while remaining on 28th Street was an easy one given their desire to continue to invest in the 28th Street corridor, according to Raul Alvarez, the restaurant's spokesperson.

“To be able to offer another option for eating out, and add to the diversity of what’s already available here, but to really make the investment in 28th Street at a time when not everyone’s interested in doing that," Alvarez said.

Kent County now has the second largest Hispanic population in the entire state, only behind Wayne County, according to U.S. Census Bureau data.

Rick Baker, president and CEO with the Grand Rapids Area Chamber of Commerce, said with minority communities expected to generate the most growth in West Michigan over the next 10 years, the chamber is working to ensure Hispanic and minority-owned businesses have the tools in place to successfully participate.

“We want them to be successful and that will have an impact on the success of our entire economy," Baker said. "If that’s where our growth is going to take place, we want to have that growth included in a successful business community. It’s critical."

For Mata, the expansion of her restaurant is the realization of a dream she admits she never even knew she had at first.

Earlier this year, Lindo Mexico was awarded the 2015 Hispanic Business of the Year Award by the Hispanic Chamber of Commerce. Mata has also been nominated for the 50 Most Influential Women in West Michigan by the Grand Rapids Business Journal.