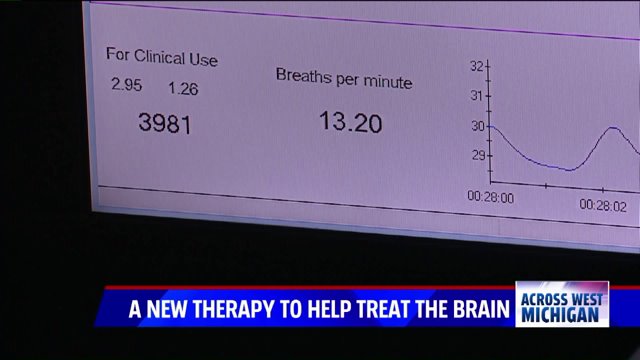 GRANDVILLE, Mich. – In this day and age, it’s impossible not to feel overloaded, what with deadlines, technology, and our busy personal lives. But life shouldn’t feel overwhelming when you’re only eight years old. Such was the life of Jackson Pojeski.

Tiffany Pojeski tells how her eight-year-old had meltdowns, problems focusing, and sleep issues. "It was the simplest things: finishing his homework or putting his socks in the laundry basket, he would drop to the floor crying, ‘I can’t do it. It’s just I’m so frustrated! You don’t understand.'"

Jackson was never diagnosed with attention deficit hyperactivity disorder, says Pojeski, but "we were using melatonin every night, because his brain wouldn’t shut off."

But after 40 sessions of treatment with Neurocore, Pojeski says, her son “did a 180.”

“My son has really turned around, he’s doing amazing." Now she talks about "how happy he is."

ADHD is one of the most commonly diagnosed disorders for children, and diagnoses have risen to 11 percent of kids ages 4 to 17 in the U.S.

Despite best practices calling for both medication and behavioral therapy, most kids diagnosed only take prescription medicine.

Neurofeedback, a treatment that’s been around for decades, is helping some people to stop taking medicine to overcome long-term conditions like depression, anxiety, and ADHD.

Walking into Neurocore’s clinic in Grandville, the therapy room is a quiet room where patients are hooked up to electrodes on their ears and head to chart their breathing, heart, and brain waves while they watch a movie.

“It’s a reward system for the brain: every time that brain is in the correct balance, the movie is playing,” explained Fintelman. “As soon as it becomes unbalanced, that movie pauses, and it’s instant correction going to that brain saying, Hey, that’s not the right place to be.”

“So, over time, that brain recognizes those pauses and actually starts to correct the brain wave activity internally,” said Fintelman.

Denise Kooiker told FOX 17 her son Landon is a Neurocore success story, too. She said he is no longer a nail biter, nearly two years after his treatment.

“I think it’s always helpful too to know somebody who [says,] Hey this really does work,” said Kooiker. “It sounds hokey pokey.”

Like most therapies, there are criticisms of Neurocore, including an online complaint board where patients say it was hard to get appointments, they disliked the lack of privacy in the brain room, and concerns about the creams used to prep the earlobes and head for electrode placement.

For instance, Neurocore uses Ten20 EEG Conductive Paste. Some patients were concerned that this paste has carcinogens in it, but its maker, Weaver and Company, writes that it’s a topical cream , and “the paste is essentially non-toxic if ingested," and notes the worst symptoms would be skin irritation.

"As with any topical substance it is important to follow instructions set forth by the company producing the product.  10/20 conductive paste is used by various hospitals and other medical facilities on a daily basis and the only reported issues with the paste involve slight skin irritation or drying - primarily for those folks with sensitive skin.  For folks that do have sensitive skin we do offer an alternative paste option but there has rarely been in instance where that is necessary.  As with most products when utilized properly there are not problems."

“We’re real people," said Kooiker. "We needed an extra little bit of help, and this will do it."

Neurocore’s statistics show 75 percent of their patients have either lowered their medications or cut them completely.

Fintelman said Neurocore accepts insurance, but paying out of pocket is pricey: $2,200 for diagnostic testing and 30 sessions of treatment, which is the minimum amount of therapy Neurocore says is needed to make a lasting impact.

Neurocore also has no complaints or reviews on file with the Better Business Bureau.