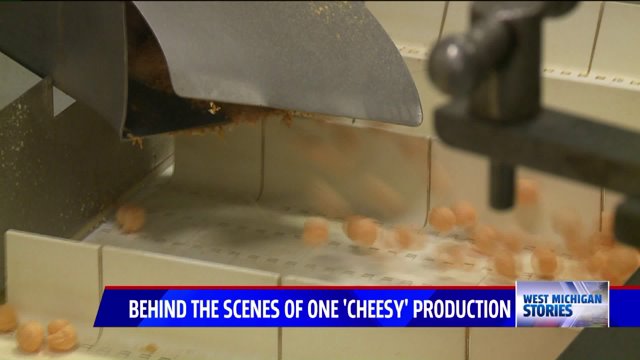 WALKER, Mich. -- Everybody loves a snack! Cheeze Kurls, puffs, balls, flavored popcorn... it's all delicious. Since 1964 the Cheeze Kurls Company has been making snack products that give all of us a weakness to indulge in something cheesy, crunchy, and very tasty. The first generation owners began the business in a mere 5,000 square foot facility that has now morphed in to 140,000 square feet as sons Tim DeDinas and Bob Franzak have assumed control (second generation).

You've probably seen the black and gold Cheeze Kurls bag in stores around the area (their signature bag and product), but their business is far more than that these days. The company uses one million pounds of corn meal each month and houses about 100,000 pounds of sunflower and corn oil. They make snacks for hundreds of companies across the United States, Canada, Mexico, and more recently England. Locally their products are made for Meijer, Walmart, Walgreens, CVS, Rite-Aid, and Spartan. While they don't manufacture the actual tin, Cheeze Kurls also makes the popcorn that fills two-thirds of the Christmas tins in the United States each year.

Take a look at some of the numbers: they can produce 1,200 pounds of popcorn per hour, three tons (6,000 pounds) if all machines are running full speed. Two tons of cheese puffs per hour, and one ton of crunchy cheeze kurls per hour. The entire process from start to finish to make a cheese corn/puff/ball is only about five minutes. Watching the process and production line is amazing...truly a well-oiled machine (pun intended).

According to President Tim DeDinas, "this business has grown light years ahead of what the founding fathers could have ever imagined." Tim tells me the story of how the company fell upon hard times at one point until he and partner Bob Franzak took it over, expanded the product line, and began giving each individual customer exactly what they wanted. They never make extra product to store. Each order is filled and shipped and on the buyer's dock within 15 days of placing the order.

Before I even entered the building you could smell the cheezy snacks blocks away from their facility on Walkent Street off three mile just down the road from the Meijer headquarters in Walker. By nature, they don't sell directly to the public except for one time each year for Halloween. They like the idea of people being able to give out Cheeze Kurls snacks to trick-or-treaters instead of always candy.

As we enter the huge kitchen popcorn is popping, sauces are being mixed, cheese curls/puffs/balls are flying down the production line on conveyor belts, and the aroma permeating the air is awesome (spoken by a true snack food lover). The popcorn is popped in a large hot air popper with a flame that agitates the seeds similar to what we might do at home. Once popped, the popped corn moves through a de-seeder, then onward to a tumbler to be coated with a flavoring like cheddar, butter, or jalapeno. It's then off to packaging where the product is weighed within one gram and bagged. So if you only get what seems to be a half full bag, remember it's sold by weight not volume.

The cheeze kurls and puffs start with a 2,100 pound bag of corn meal being dumped in to a mixer. It eventually comes through an extruder. For a fry type product, the corn meal is propelled through a die in long, thin strands, then cut, fried, and flavored. It too, rolls through a tumbler for coating and then off to the packaging department. Granted the fact that these may not be the healthiest choice for a snack, they certainly are delicious. That said, Cheeze Kurls has followed the healthier choices for some of their customers by producing no fat, low carbs, low salt, no hydrogenated oils, and using non-GMO (genetically modified organisms) for some of their products. They've even produced kale and keenwah snacks.

Here's some numbers that may suprise you: 72 percent of the snack market are potato chips. 20 percent are nacho chips. Only six percent comprise cheeze curls/puffs/balls. Pretzels and other snacks make up the balance.