“I was speechless:” Man charged with felony for passing out jury rights fliers in front of courthouse 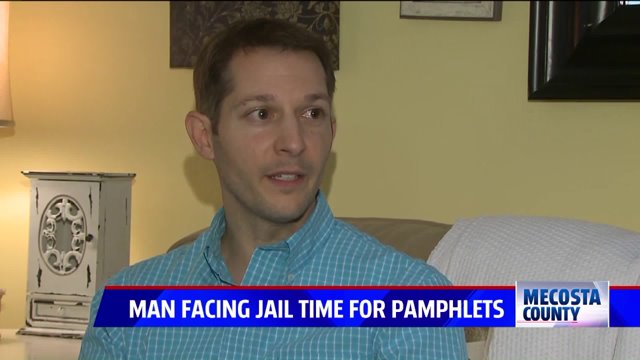 MECOSTA COUNTY, Mich. — A Mecosta man is charged with a felony for obstruction of justice and misdemeanor of tampering with a jury for passing out fliers about jury nullification rights on the sidewalk of the Mecosta County courthouse.

Keith Wood, 39, faces these charges after handing out about 50 fliers on Nov. 24, which the Fully Informed Jury Association wrote, that describe juror rights that are typically not given by judges during jury instructions before a trial.

Wood's Attorney Dave Kallman told FOX 17 the charges are "outrageous," especially after Wood posted bond set at $150,000 last Tuesday. Obstruction of justice is a five-year felony with up to $10,000 in fines, and attempting to influence jurors is a one-year misdemeanor with fines up to $1,000.

Wood told FOX 17 he was speechless.

“When he (the Judge) told me the bond, again I was speechless," said Wood. "$150,000 bond for handing out a piece of paper on a public sidewalk? Speechless.”

Wood said he charged $15,000 to his credit card to post bond. Kallman said he will fight for all of Wood's bond to be returned, and called these charges an attack on free speech.

“It’s just a blatant illegal improper use of government power to squelch a person’s Constitutional rights of free speech, that’s what this is,” said Kallman.

"There has to be push-back, and judges and prosecutors and people need to know: you cannot squelch people’s free speech rights and get away with it."

Wood said he was motivated to educate the public on jury rights knowing of an upcoming Mecosta County trial.

"It's not illegal to fully inform jurors, it's just that judges don't do it anymore, " said Wood.

The pamphlets Wood handed out specifically discuss jurors' right to vote their conscience, also known as jury nullification of law. Jury nullification occurs when a jury acquits a defendant, despite evidence, because they either believe the law is immoral or wrongfully applied.

However, since the late 1800's many judges have omitted jury nullification from their jury instructions, though Kallman said it is implied.

“It’s implied, it’s not overt," said Kallman. "This is more overt, and I understand why the judge doesn’t like it okay, but isn’t that part of free speech? You allow speech you don’t like."

Kallman said this is a violation of Constitutional rights including freedom of speech.

“It’s free speech for goodness sake,” said Kallman. “The Judge directly ordered him to be arrested for jury tampering, for tampering with a jury that didn’t exist, now wrap your head around that.”

Back on Nov. 24, Wood said the magistrate, then other court personnel and deputy, came outside three times, asking him to come into the courthouse because the judge wanted to speak with him. Wood said the third time personnel came outside a deputy threatened to call Big Rapids Police to arrest him. At that point, Wood went inside to speak with the judge, but was told he was not being detained.

“She (courthouse personnel) wasn’t being rough but she was kind of corralling me and she was touching my jacket, and so I asked her again, I said, “Am I being detained?” And she goes, ‘No,’” described Wood.

“Judge Jaklevic came out of his chambers, he looked at me, he looked down the hall, I didn’t know who he was looking at, and then he looked back towards me and the deputy and he said, ‘Arrest him for jury tampering,'" said Wood.

Wood refused to take a plea deal Tuesday morning and his preliminary hearing is set for next Tuesday. He and Kallman want his charges dropped and are deciding whether to pursue a federal lawsuit.

"I truly believe in my heart of hearts I didn’t do anything wrong, I didn’t break the law, so they need to drop all of the charges against me," said Wood.

Stay with FOX 17 for this developing case.