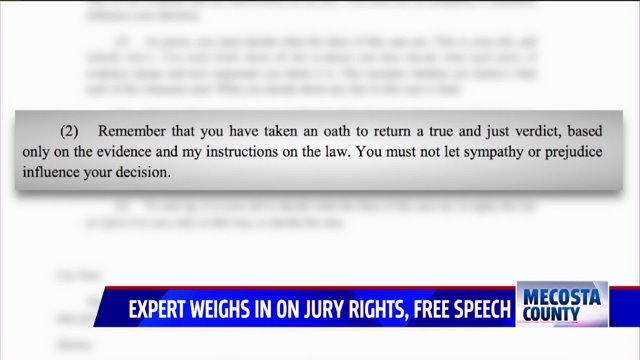 BIG RAPIDS, Mich. - The Mecosta County Prosecutor responded after a Mecosta man was arrested and charged with a felony for handing out pamphlets on jurors' rights.

Keith Wood, 39, father of seven, former pastor, and self-employed insurance broker, faces the charge after handing out about 50 fliers on Nov. 24. The Fully Informed Jury Association wrote the pamphlets, which describe debated juror rights that are typically not given by judges during jury instructions before a trial: namely the right for jurors to vote their conscience, or jury nullification.

Wood told FOX 17 he was not targeting jurors when he handed out the fliers as he stood on a public sidewalk in front of the courthouse. However, he was charged with the five-year felony of obstruction of justice and a one-year misdemeanor for jury tampering.

"In order to protect a criminal defendant's right to a fair trial, the prosecutor's right to speak freely is curtailed. The most that any representative of this office would be able to share is that which is contained in the public record. It appears that all of that information has already been acquired by the media.

Thank you for your understanding and respecting our ethical duties.

The charges against this individual are merely accusations and he is presumed innocent until and unless proven guilty."

Western Michigan University Cooley Law School Professor of Constitutional Law Devin Schindler told FOX 17, given the facts known at this point, the Mecosta County prosecutor has an "uphill battle" to make a conviction.

“Personally I think the prosecutor has an uphill battle here because of the important First Amendment values that are at stake: unpopular speech is still protected speech," said Schindler.

“From the Constitutional perspective, we have an individual that was on public property, engaging in the highest form of protected speech: political speech, it doesn’t get more protected than that under the First Amendment."

“But having said that, the government has always had the authority to prevent or to sensor political speech if it had a compelling and extremely important reason to interfere with that speech," said Schindler.

Addressing the specifics in the pamphlets Wood handed out, Schindler said he believes jury nullification is not a juror's right.

“The fact of the matter is juries and jurors take an oath that they will follow the law as given to them by the judge," he said.

The jurors' oath, along with the judge's jury instructions, Schindler argues, quashes jurors' rights to nullify the law. For example, according to the Michigan Model Criminal Jury Instructions , this is part of judge instructions read to jurors:

"Remember you have taken an oath to return a true and just verdict, based only on evidence and my instructions on the law. You must not let sympathy or prejudice influence your decision."

Schindler said, “Juries are told very specifically to not vote their prejudices: prejudice, conscience, that’s really the same thing. Don’t vote your prejudice, don’t vote your bias, vote based on the legal standards given to you by the judge.”

FOX 17 also spoke with Ontonagon County Prosecutor Mike Findlay about whether jurors have the right to nullify the law: he said based on the instructions judges read to juries, it's "unclear."

Due to Mecosta County District Judge Peter Jaklevic removing himself from hearing this case, as the defense said he ordered Wood's arrest, FOX 17 called again for comment. His office declined.