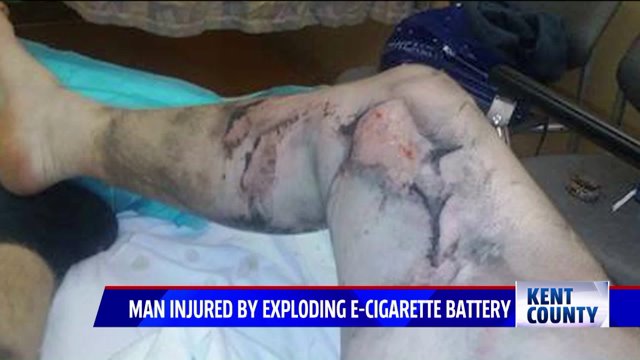 GRAND RAPIDS, Mich. – A man horribly injured after an e-cigarette battery exploded in his pocket is left with second and third degree burns on his leg, now warning others about the dangers he claims were never given to him.

Daniel Gosset, 25, was changing his son’s diaper when he felt a warm sensation creeping down his leg. Gosset said the battery in his pocket seemed to be heating up very quickly before it was too late.

“By the time I went to go unbutton my pants it ignited and blew, and by then it looked like a flare going off,” said Gosset.

The battery ignited due to spare change in his pocket which completed the positive and negative charges of the battery. Gosset said he put his child on the bed before facing the opposite direction as the flare melted his jeans and skin. The burn left him with second-degree partial and third degree burns on his right leg. His child was not injured.

“The tobacco company will tell you it causes lung cancer but the vape store ain’t gonna tell you, you could lose your hand, lose your face, or lose half your leg,” said Gosset. “I couldn’t wash my leg right off cause I would have washed all my skin off. I thought it was safer to vape over cigarettes. But I tell you what, I’d rather have lung cancer than almost losing my leg."

Gosset’s a father of two, uninsured, now left with scars for the rest of his life. He said he was never warned about the dangers of e-cigarette batteries in his three years of vaping. But those in the business say safety is key because it’s not the first time this has happened. Russ Swanson, Social Media Coordinator at Mister-E’s Vape Shop in Grand Rapids, said most of the time it’s user error.

“Being in social media I see stories of these things happening quite frequently,” said Swanson.

Swanson said it’s important to spend time in your local vape shop so they can guide you through the safe uses of e-cigarettes, that it’s critical not to carry bare batteries in your pocket.

“I would encourage you to buy a battery case or battery holder,” said Swanson. “That is two dollars between safety and spending the night in the hospital with second degree burns.”

Gosset said he’s never vaping again and asked to take a month off from work, doctor’s orders. Professionals in the business warn anyone who vapes to do their research before using e-cigarettes. And to never put an open battery in your pocket. They also say, things like change and keys should be kept away from the device.