Family says puppy was stolen from their porch 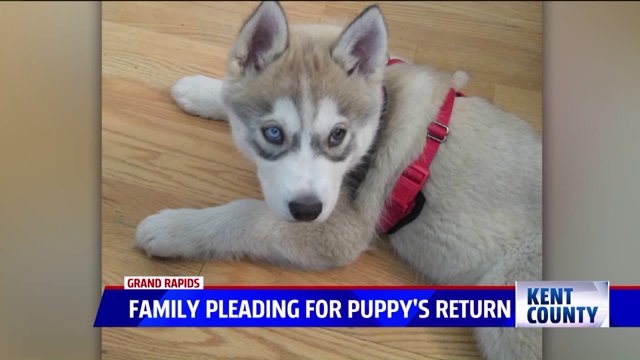 Snowball the Husky puppy was returned to the Kempker family Wednesday.   The family told FOX 17 two kids  found him in Harrison Park and returned him to them.

GRAND RAPIDS, Mich. -- A West Michigan family is searching for a Husky puppy that they say was taken from their porch Sunday evening.

The Kempker family recently moved to a home in the 800 block of 11th Street NW.  They moved from a rental they were living in after a fire destroyed their previous residence in March.

Mary Kempker claims the puppy, Snowball, was taken from their porch at about 6:30 p.m. Sunday.  She said the dog was tied up outside to use the bathroom.

"When I came to get him he was untied and gone," Kempker said.

Kempker said her family contacted police, but she's also taking to social media to help locate the dog.   Her post on the "We Are Westsiders" Facebook group has been shared more than 1,600 times as of Tuesday evening.

Kempker said Snowball has been a big comfort for her children since the fire.

"He’s just a member of the family,” she said.

Kempker is offering a $250 reward for the return of her puppy.   Anyone with information on the dog's whereabouts can contact Grand Rapids Police.