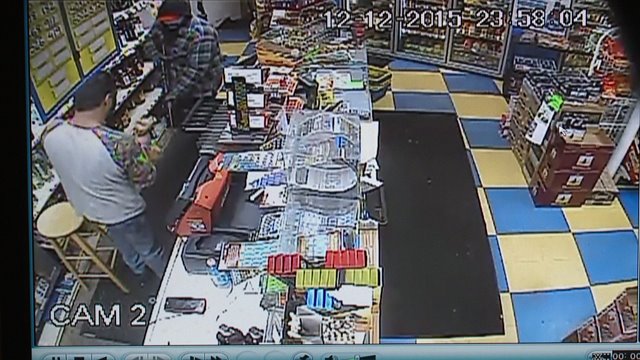 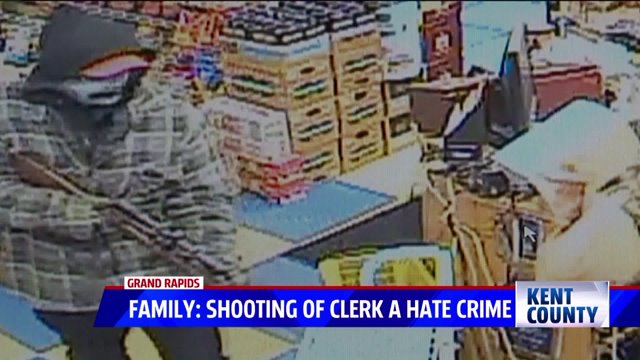 GRAND RAPIDS, Mich. — After the clerk of a Grand Rapids party store was shot over the weekend and fought back during an armed robbery, the store's manager is calling it a hate crime.

The clerk, who friends and family have identified as Tony, is recovering from the armed robbery at Bottlenecks on Fuller NE on Saturday.

A manager with Bottlenecks, who wished to remain anonymous, told FOX 17 the clerk saved his own life after the gunman shoved his rifle into his mouth. The manager said Tony fought back, moving the gun to his cheek just before the gunman pulled the trigger.

Gunman said, "I used to kill people like you in Iraq with no problem.." Clerk fought back, moved gun so bullet went through his cheek @FOX17

During the struggle, the manager said, "Tony told me that (the gunman) asked him to get on his knees, and (the gunman) was saying all this vulgar stuff about him, like Tony being associated with terrorism or with ISIS."

The manager told FOX 17 the gunman called the clerk a terrorist, ISIS, and said things like, "I used to kill people like you in Iraq with no problem."

As of Monday afternoon, the Grand Rapids Police Department is investigating the armed robbery but Sgt. Terry Dixon said they "are not prepared to call this a hate crime."

The store manager first shared harrowing surveillance video with FOX 17 on Monday morning showing the incident . It began at 11:57 p.m. Saturday, when the video shows a masked gunman armed with a rifle barging through the back door as Tony made the store's liquor order.

The manager said Tony immediately put his hands up, then emptied the cash register, and gave the suspect the money.

But then the suspect forced Tony to the backroom, away from surveillance cameras.  The manager told FOX 17 the robber put his gun into the clerk's mouth and forced him onto his knees while saying ethnic slurs and calling Tony a "terrorist."

Then Tony fought back, moving his head to the side just before the shot fired through his cheek. The manager said Tony remembered falling back, the gunman firing two more shots, and then running out the door.

Surveillance shows Tony walking out of the back area holding his bleeding face, as the manager said he called 911 on his cell phone because the store's land line got kicked out. Police arrived to the store minutes later, and the manager said they are grateful Tony handled the situation bravely.

"(Tony) handled it really well, he did what he was supposed to do in a robbery situation, and after I think he was very brave for doing what he did and calling the cops himself," the manager said.

The manager told FOX 17 the owners are saddened by the entire incident and can't understand why Tony would be associated with terrorism: Tony is Punjabi, and has nothing to do with terrorism they said.

"I don't know why (the gunman) associated him with terrorism, maybe it's because of our skin, because of what we look like, and it could happen to anyone that looks like us or has our skin tone," the manager said.

"That's just the sad part because, at the end of the day, we're just normal people trying to live normal lives, we're not associated with anything like that, and it's unfair that we have to live in that fear."

Police have only been able to offer a vague description of the suspect, who is believed to be a black man who is about 6 feet tall.  The suspect left the store wearing a mask, black hoodie, quilted flannel shirt, and black pants.

Click below for the surveillance video of the robbery.

Warning - some viewers may find this disturbing.