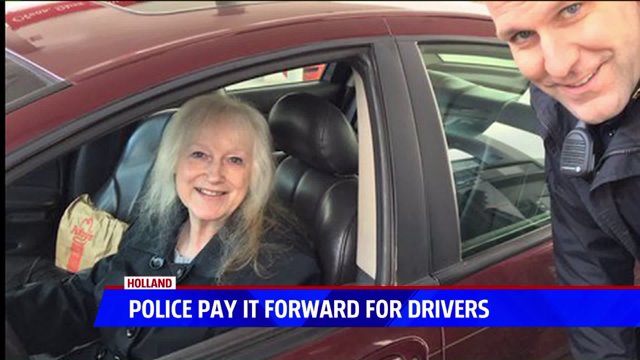 HOLLAND, Mich. – Perhaps even more so during the holiday season, the simplest of acts can have the most positive effects.

Just ask a slew of drivers in Holland, who were pleasantly surprised Tuesday when they pulled into any one of three gas stations in town, where a very special pay-it-forward moment was taking place.

Molly Kehrer, a Holland mom and blogger, was one of those drivers. After doing some holiday shopping with her two young kids, her gas light clicked on. Pulling into a gas station to fill up, she was surprised to see several police cruisers stopped near the tanks, but was even more surprised to find out why they were there.

A few days ago, the Holland Department of Public Safety received a large anonymous donation, with one caveat.

"Specifically one of the requests was that there were random acts of kindness done to people,” said Holland DPS Sergeant Larry Matzen. "One of my guys came up with the plan of, let's just hang out at the gas station. You never know who's going to show up there. The reactions we got were priceless."

Those who did show up, including Molly and the kids, were treated to a window wash and $20 worth of gas, compliments of the officers through the donation. A small act, with rippling implications.

"It was a small thing, $20 in your gas tank,” said Molly. “But a really big thing that I’m carrying with me now is the sense that I want to pay it forward to somebody else."

Along with the monetary donation, Holland DPS also received several gift cards to local retailers. They’ve been using the past few days to take local families in need shopping for the holidays.

On top of making people’s days – and saving them a few bucks on gasoline – Holland officers saw the act as a way to positively interact with those they serve and protect, something they say can’t be overlooked in good community-oriented policing.

"The uniform that we wear, when you show up to a scene, you're automatically judged from what you're wearing,” said Sgt. Matzen. “This just helped us put this personal element to it. We as officers learned just as much as the people we interacted with.”

Molly blogged about her experience on her website , writing:

I noted a few police cars in the gas station parking lot as I drove up, but the officers were gathered outside, and nothing seemed amiss, so I pulled up to the pump. After reaching over to grab my card from my wallet, I turned to find an officer at my window. A few thoughts ran through my head, not the least of which was, "This gas station was just robbed and he's going to tell me I need to leave right away." Funny, what unexpected moments will do to your mind. Instead, the officer introduced himself and another officer, and proceeded to ask if he could pump $20 of gas for me.

Holland Mayor Nancy DeBoer was also at the station and was greeting residents.  She tweeted out the photo below .

Molly encourages people to learn from this act of kindness, and join in the conversation by using the hashtags #GracefulDecember or #OneSmallThing