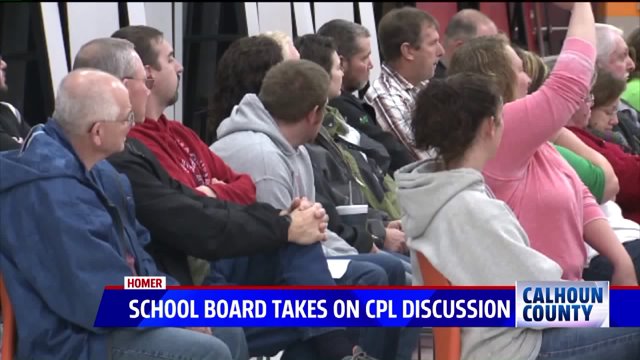 HOMER, Mich. -- Should people with concealed pistol licenses be allowed to openly carry their weapons inside schools? That was one topic of debate Monday night at the Homer Community Schools.

FOX 17 first introduced you to this story  a couple weeks ago after a father who has a valid CPL walked into Lillian Fletcher Elementary School with a loaded gun on his hip to sign his son into class.

The school went into lock down after officials told the dad the school was a gun-free zone. Despite the Homer school district's current lock down policy, police say it's okay to carry a pistol inside a school as long as you have a valid CPL license and the gun is visible.

Monday night, dozens of residents made their way to the Homer Community School Board meeting and voiced their views on the controversy.

Some said the school's current policy should remain the same, while others, such Joseph Solis-Mullen, took to the podium to stand for Second Amendment rights. "I was surprised so few people came out, just based on the talk of the town," Mullen said, adding, "I know it’s a controversial issue, [but] the law is pretty cut and dry. I just want to see proper policy decisions being made, because bad press and fear makes bad policies."

FOX 17 spoke with the Homer Community Schools Superintendent Robert Wright, and he said he appreciates everyone who came out, and the board will be considering their advice.

"The participation was great, that’s what we wanted," Wright said. "I think both sides were represented well, both inside our community and outside our community. I think everyone was passionate about the side they were on, and I don’t think I heard at any given point that it wasn’t about the kids."

Nearly a dozen people voiced their opinions on what they want, suggesting to the school board what a new policy should say. Some suggestions included requiring  check-ins at the office, utilizing veterans, even arming teachers to help save kids' lives.

"I think everyone was passionate about the side they were on and I don’t think I heard at any given point that it wasn’t about the kids," said Wright.

Kids' safety is the exact reason he carries a gun, Mullen says.

"Not everyone is comfortable around guns, but CPL holders aren’t people that are going to be going on these completely sickening rampages," he said. "Everyone wants to pretend that it won't happen in Homer."

"In the spirit of democracy, I want a compromise which means no one gets everything they want," Mullen said.

Mullen hopes the school district will come up with a solution quickly, but Wright says that's easier said than done.

"It’s a process," Wright said. "We didn’t just get here overnight, and it’s going to take some time to work through that."

Homer Community Schools tells FOX 17 they plan to review their current lock down policy at their next meeting on January 6.