Family warns others after ice flies off vehicle, smashes windshield 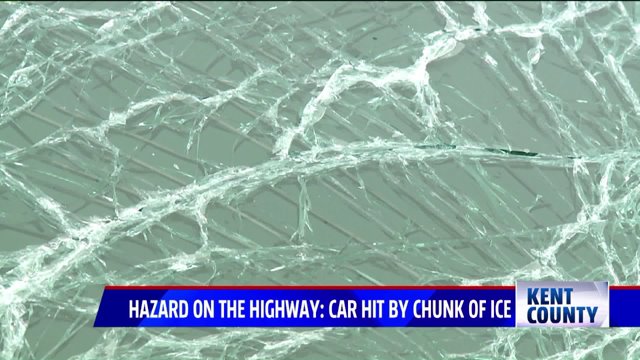 BYRON CENTER, Mich. — It's a sound one West Michigan woman says she'll never forget: the loud cracking noise as a piece of ice flew off another vehicle and struck the windshield of her car.

"It just flew right into my windshield," Kim Krupiczewicz said.

The incident happened after Monday's ice storms, Krupiczewicz was sitting in the passenger seat, while her husband drove her and her daughter, Macy, to Lansing for a college tour.

She says when they pulled over she realized there was glass all over her and the car.

"I had glass in my hair and in my mouth," she said. "When I was trying to talk I was chewing on hard chunks of stuff.  It was all over my clothing and inside the car."

Krupiczewicz is urging drivers to take five extra minutes to make sure their vehicles are completely cleared off during the winter. It's a sentiment shared by the Grand Rapids Police Department.

"We're asking motorists to take a few extra minutes to clear off their vehicles, to not only keep themselves but others safe," said Grand Rapids Police Sgt. Terry Dixon.

The Krupiczewicz's tell FOX 17 they were successful in grabbing the drivers attention after the accident. Both parties pulled over at the nearest exit and waited for police.

At this point, police are still looking into whether the driver with the ice on his roof will be charged.

"I just hope and pray this doesn’t happen to anybody else, because it could be worse next time," Krupiczewicz said adding, "It really makes me sick to my stomach and makes me nervous to drive again."