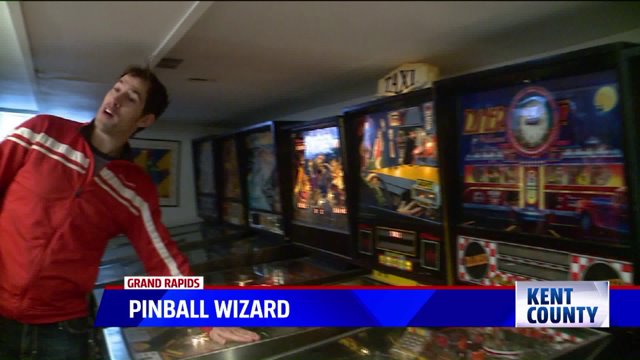 "All I wanted to do was play pinball," he said, adding that he grew up near a bowling alley filled with pinball machines.

GRAND RAPIDS, Mich.--Bumpers, bells, whistles and screams; all are sounds from pinball machines.

The games first made their debut in the late 1940s, taking over arcades, pool halls and bowling alleys.

As years passed, those games were removed and replaced with different games, however, many of those games are still right here in West Michigan, inside a Grand Rapids home.

The owner of those games, Matt Mckenzie, tells FOX 17 his love for pinball stems from his childhood.

"All I wanted to do was play pinball," he said, adding that he grew up near a bowling alley filled with pinball machines.

Fast-forward 20 years and not much has changed.

"It was just a thing I got into," Mckenzie said.

He currently owns 40 pinball games, 30 of them inside his home.

He says each one of the games tells a different story.

"Some I played as a kid, some of them, I didn’t, others, I got as a restoration project," he said. "One time I bought several games from a banana warehouse distribution plant and they all smelled like bananas. Bananas are fine, but when you smell it twenty-four-seven, it's very unpleasant."

Mckenzie says he equates pinball machines to a used car, each one made in a different year, all with different price tags.

Just recently, he started working full-time as a pinball repair man. He started his own business called GR Pinball. He charges $65 an hour.

"It's great fun. I get to go into people’s homes, pet their dogs and cats and fix machines that make people happy," he said.

When Matt isn't fixing pinball machines he works part-time as a professional announcer. He also works at a radio station in Muskegon.