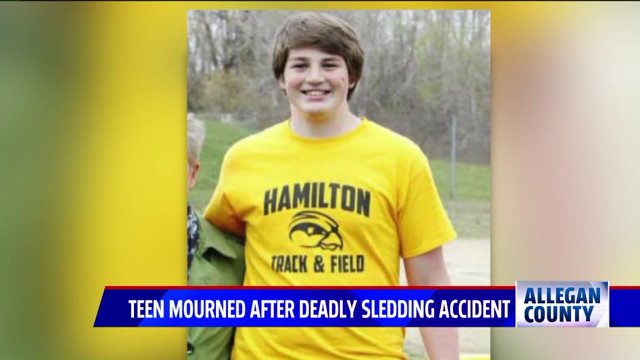 MANLIUS TOWNSHIP, Mich. — A teen boy was killed after the sled he was riding on, which was being pulled by a vehicle, hit a tree, according to the Allegan County Sheriff's Department.

The accident happened just before noon Saturday in the 5300 block of 133rd Ave. when the sled the teen was riding on hit a tree while on private property, according to the sheriff's department.

15-year-old Mason Dykstra was taken to the hospital where he later died from his injuries.

"It’s been difficult for everybody. Loss is difficult when it is a 15-year-old boy in the prime of his high school career," said David Tebo, Superintendent of Hamilton Community Schools.

Dykstra is described as a normal freshman student who enjoyed life and had a great smile.

Funeral arrangements for Dykstra are still being arranged.

Investigators said they have not determined whether any charges will be filed against the driver of the vehicle that was towing the sled.

A Go Fund Me page has been set up to help for the Dykstra family to assist with medical costs.