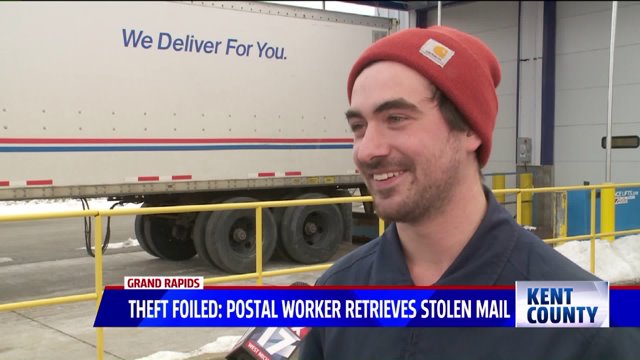 GRAND RAPIDS, Mich. - A mail carrier in Grand Rapids went above and beyond the call of duty, fending off a group of thieves while delivering mail.  His efforts are now going viral.

"Just the audacity of it, this is a nice area and neighbors look out for each other," said George. "The fact they went up on the porch to grab the package is a little alarming." He had ordered some inexpensive protein powder from Amazon.

Kunst watched as the teens ran off with the package and immediately took off after them.

Kunst said he tried to take a picture of the boys, but they took off running and ditched the package. Afterwards, he took the box back to the postal facility on Division Avenue where an apology letter was written to George, he said. The package and letter were returned to him the next day.

"I can't say enough about Louis and what he did to represent the U.S. Postal Service," said Mclain. "I guess it's reached quite a far way and in different states, so it's a great thing he did."

George was so happy with Kunst's actions he posted a photograph of the letter on Reddit.com, saying, "The U.S. Postal Service doesn't play games." The post has generated thousands in online comments.

After calling Amazon and explaining what happened, George was given a refund and was allowed to still keep that package of protein powder. As for the would-be thieves, those teenagers have not been caught.