Snyder: I will release emails about Flint water crisis 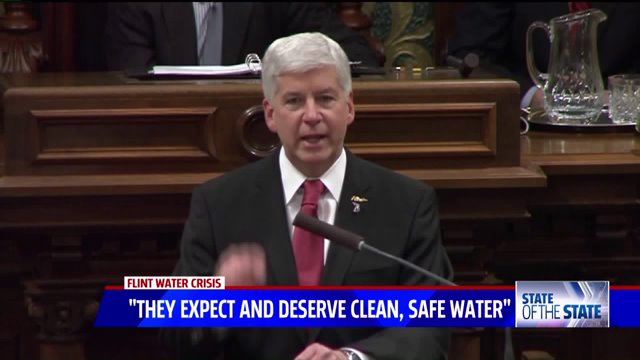 "I know apologies won't make up for the mistakes that were made, nothing will, but I take full responsibility to fix the problem so that it will never happen again," Snyder said Tuesday night.

"We are working to do whatevery we must until this crisis is resolved. The people of Flint have chosen a new Mayor, and I am personally committed to working hand in hand with Mayor Weaver so that we can rebuild the trust that has been broken."

Snyder wants to commit $28 million more in the short term to fix the disaster that has put residents at risk for lead exposure.  It is the second wave of state aid to be committed since October, when $9.3 million was announced.

"I am very concerned that we have decades of financial commitment that have been caused by this problem, and frankly by not addressing it in a timely manner is going to cost the state a lot more than it should," Rep. Winnie Brinks, D-Grand Rapids, told FOX 17.

"It’s something I am looking at in phases and right now, where I think the phase one is the immediate need to make sure this crisis is contained... and that’s what the supplemtnal is aimed at," he told FOX 17. "That’s what's most urgent, then we will look at the phases that follow which will be long term funding solutions."

Snyder also proceeded to lay out a comprehensive timeline of the crisis, speaking directly to the people of Flint saying: “I let you down, your government failed you," adding the state needs to "make sure that this never happens again in any Michigan city."

He also is deploying more National Guard members to the city, increasing the number from more than 70 to about 200.

Snyder said his emails will be available Wednesday on the Michigan government website. The governor and his office are exempt from public-records requests under Michigan law, but given his administration's regulatory failures, he decided to bow to pressure to disclose more information about what he knew and when.

I will release my emails regarding Flint so that you have answers. You can find the emails tomorrow at https://t.co/chhzvuHGot #MISOTS16

He also plans to appeal President Barack Obama's denial of a federal disaster declaration for the area. On Saturday, Obama signed an emergency declaration, clearing the way for $5 million in federal aid, but denied Snyder's request for a disaster declaration based on the legal requirement that such relief is intended for natural events, fires, floods or explosions.

Almost all his other priorities, except the mounting financial problems in Detroit's state-overseen school district, were shelved from the speech due to the crisis.

Taking prompt legislative action is needed to minimize the fiscal impact on both Detroit and the state #MISOTS16 pic.twitter.com/wFOu43dTkM

Snyder said the most pressing education issue statewide this year is restructuring the Detroit Public School system, calling for a "transnational change" while urging the passage of bills to overhaul the district by splitting it in two, spending more than $700 million over a decade, warning of a potential bankruptcy.

"Though our recent work in Detroit gives us a measure of pride, Detroit schools are in a crisis," he said. "Taking prompt legislative action is need to minimize the fiscal impact to both help Detroit and the rest of Michigan, the time to act is now and avoid court intervention that could cost all of us much more and be much more detrimental."

The governor also used the the Flint crisis as an opportunity to begin the discussion on the need for further investments in the state's infrastructure beyond roads.

“We have a hidden problem, we see the rusty bridges, we drive on the roads and see the pot holes and cracked concrete, but underground some pipes are over 100 years old, some are made of wood, others are made of lead," he said. “We need to get this right in Michigan for the long-term. We need to invest more and smarter in our infrastructure so we can avoid crises like this in the future.”

Snyder announced he will convene a commission to study and make recommendations about Michigan's infrastructure needs, threats, opportunities and costs. Priorities will include water and sewer infrastructure, energy and electrical grids, broadband modernization and upgrading the aging Soo Locks.

Brinks says, given the treatment of Flint, she remains skeptical other issues can now be addressed.

"Its nice to talk about innovation but when we hear things about not being able to fix something as basic as clean water for the entire community, it makes it difficult to believe we can believe we can do a smart infrastructure in our state," she said.

Snyder did not give any indications he plans to resign from office, committing his next three years in office to solving the Flint crisis, among other things.

"I know that there will be long term consequences, but I want you to know that we will be there with long term solutions for as long as it takes to make this right," he said.