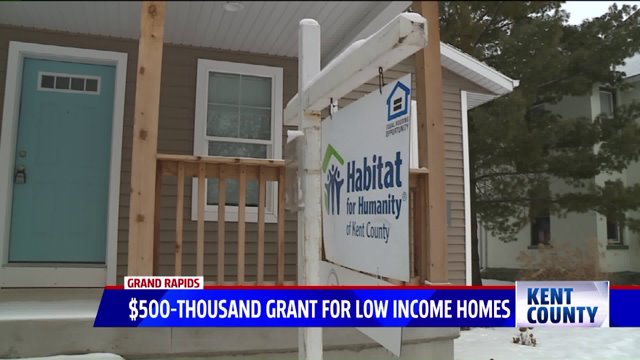 GRAND RAPIDS, Mich. – The Grand Rapids Community Foundation announced a $500,000 grant to Habitat for Humanity of Kent County. The funds will be used to help 120 families maintain affordable housing in the next two years in the city’s West Side.

With high-end development on the rise in Grand Rapids, many current residents worry whether they will continue to be able to make rent. However, this grant money will fund a West Side revitalization effort, in both building and repairing homes at little to no cost to participating families.

Ciara Sanders is counting down the days until she and her family can move into their new home as Westsiders.

The scaffolding is up on her home, and she said she continues to put in her “sweat equity,” building her family’s home with Habitat Kent.

“I do believe that Habitat building homes on the West Side, and building up the West Side in general, is going to be a great thing for the community so that we can have a medium between high-end development and middle class families or low-income families,” said Sanders.

“What this money is doing is making a critical investment in revitalization,” said McKee.

“I think there’s a very thin line between revitalization and gentrification, and what this is doing is recognizing that in order to grow at a pace that benefits all, there needs to be an investment for those who may not naturally have a voice at the table,” she said.

With seemingly constant growth, these neighborhoods face growing pains. Yet McKee hopes this grant can help strike the balance of development that benefits families of all incomes.

“We don’t want displacement and we don’t want gentrification: we want to ensure that everyone is benefiting and not just some,” said McKee.

The West Grand Neighborhood Organization's Executive Director Annette Vandenberg also weighed in on the grant and explained to FOX 17 that "it takes a mix of income diversity to make a great neighborhood."

Vandenberg is hopeful too that this grant will play into the bigger picture of maintaining affordable housing. For example, Vandenberg believes this money may help families with children identified as Challenge Scholars to stay in their neighborhood, and therefore continue to reap the benefits of that program, which helps pay for the first two years of college.

McKee said they are looking for families whose homes qualify for the 98 repair or weatherization projects they plan to complete within the next two years. If you are interested to see if you and your family’s home qualifies, see Habitat Kent’s website or give their office a call at: 616-774-2431.