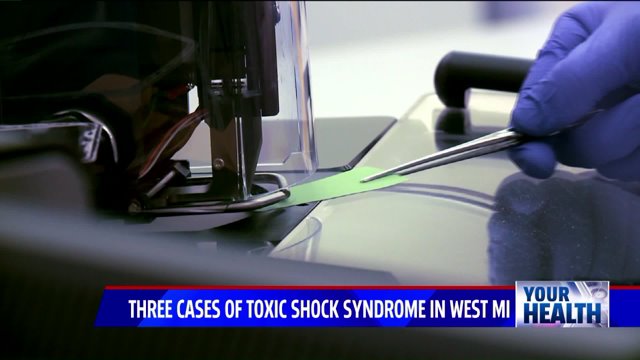 KENT COUNTY, Mich.--As a Greenville father works to raise awareness of the infection that nearly killed his daughter, FOX 17 has learned Rylie Whitten isn't the only one suffering from toxic shock syndrome.

After mentions on the Today Show, in Cosmopolitan magazine, and on FOX 17, many are asking questions about TSS, especially now that we've learned there's more than one case being reported here in West Michigan.

"That kind of piques your concern over it, it starts that process of trying to connect the dots," said Kent County Health Department's Epidemiologist, Brian Hartl.

Despite the recent reports, Hartl says you shouldn't be alarmed. "It doesn’t raise a red flag for us, but it definitely piques our interest," he said.

Hartl says he's working to identify "a bigger issue" as he works with other health departments to find a link between three young West Michigan girls who were all diagnosed with toxic shock syndrome early January of 2016, including Rylie Whitten of Greenville.

All three were treated at  Helen DeVos Children's Hospital.

"We're just trying to figure out where their exposure occurred," Hartl said, who added that there's no need to worry just yet.

"Even though we have a cluster of patients here that have had the syndrome, it’s very rare," Hartl said.

In fact, doctors say it only affects one in every 100,000 U.S. women of child bearing age.

"The toxins can effect all of your organs and basically shut them down, especially females if you’re menstruating and use super-absorbent tampons," Hartl said.

According to the Kent County Health Department, there were only 11 cases of TSS reported in the state of Michigan from 2012-2015, but in 2016 alone, just 21 days, we've already seen three.

One of the key questions right now is the source, leaving Hartl asking questions:

"We don’t want to raise any extra heightened sense of panic, because sometimes that can happen in situations like this," Hartl said.

Experts reiterate that TSS is very rare but to stay vigilant. If you or someone you know is experiencing flu-like symptoms, don't hesitate to get checked out.

Hartl also mentioned that TSS can happen to guys too. "Males can have surgery or some other type of skin abrasion, or cut, you know, where the bacteria can get into their bodies," Hartl said.

In fact, in 2015, there was a confirmed case of TSS in a five-year-old boy in Kent County.

To learn more about the symptoms of toxic shock syndrome, click here.

Whitten is in stable condition and is doing better each and every day.