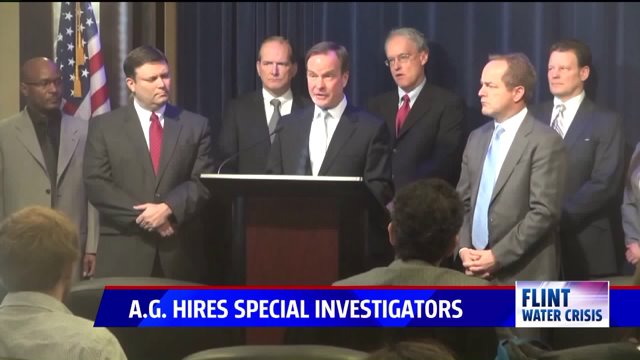 LANSING, Mich. — On Monday, Michigan Attorney General Bill Schuette announced the selection of two outside investigators to determine if any laws were broken by the state when handling Flint's water supply crisis. Schuette said he hired outside counsel because he also has to defend the state against pending lawsuits on the matter. He said he wants to avoid conflicts of interest. Both investigators have to report back to him.

In response to a reporter's question about his donations to Snyder's campaigns, Flood said he has contributed to both Republicans and Democrats and that his donations are based on the person and not party.

Flood said he has consulted with an ethics attorney.

Schuette said he launched the investigation because "a flood of new information, new data, new facts, new circumstances" came to his attention around New Years, including the resignation of Department of Environmental Quality employees and the troubling analysis of Flint's water quality.

Because of who he selected as outside investigators, some accuse the AG of playing politics.

"I'm not that way," Schuette defended himself. "Anybody who knows me knows I'm a straight shooter. I'm going to have this investigation."

Meanwhile, the Michigan Democratic Party isn't pleased with how the outset of the investigation is being handled. "This is only going to feed into the perception that the attorney general and the governor are not operating in a transparent and ethical way," Brandon Dillon, the MDP chairman told FOX 17. "I think the attorney general needs to appoint somebody truly independent without financial ties to the governor."

The AG said there is no timeline on the investigation but promised it would be thorough and aggressive.