Scams still happening due to slow roll-out of chip cards 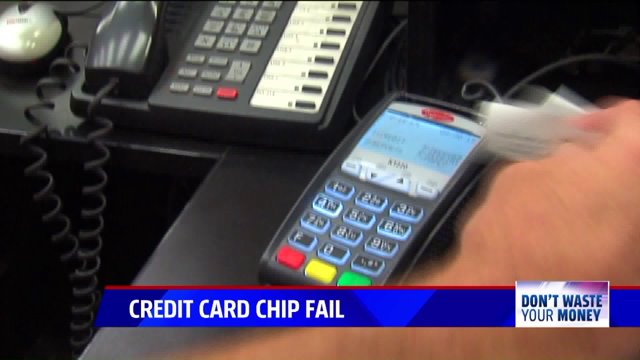 The new EMV chip credit and debit cards are supposed to be much safer than old fashioned swipe cards. Then why are we hearing more reports than ever about credit card skimmers, leading to fraud? Weren't chip cards supposed to prevent that? Every few weeks we hear another local news report of a skimmer being discovered on a gas pump.

Chip cards were launched last year with lots of fanfare, promising safer transactions thanks to that tiny EMV chip on the front.

It turns out gas stations and ATMs have two more years to switch to chip readers. That gives thieves two more years to try to scam as many customers as they can. And since it's getting harder for them to access card numbers at stores, gas pumps have now become their prime target.

Less than half of all stores are using chip cards right now. Most major grocery chains and many smaller businesses are still asking you to swipe.

If you were hoping for more security, you'll say "doesn't that stink?"

Some stores report technical issues, but the main barrier for most small retailers remains the cost of switching over.

Hopefully by 2018, card skimming fraud will be a thing of the past, because ATMs and gas pumps will no longer have swipe systems.

But until then be extra careful so you don't waste your money.