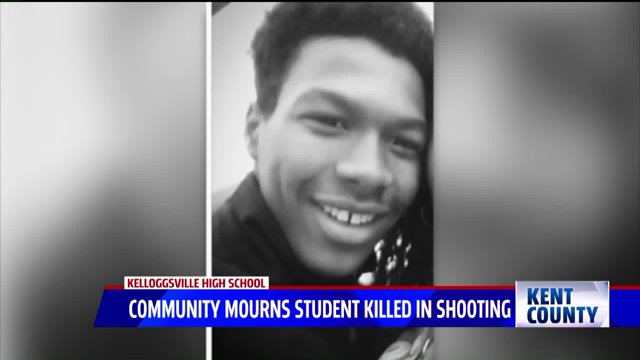 WYOMING, Mich. — At a distance, a ring of light could be seen around the hundreds that gathered at Kelloggsville High School football field Monday night. The light betrayed the mood of everyone in attendance.

Family and friends of Isaiah Blue, the 17-year-old who was gunned down last week, shed tears as prayers were said at a candlelight vigil held in his memory.

Isaiah's uncle, Dr. Gregory Seaton, was the one of his family able to get words out about his nephew; his mother earlier was brought to her knees by a special presentation of Isaiah's football jersey.

"No one really understands the cost of cool, and I don't think Isaiah understood it as well," Seaton said, referring to his nephew's troubled past.

But there was hope in his future, his family said. Isaiah had plans to go to college, a dream that will never come true.

"Isaiah and I met at the beginning of the year and mapped out a plan," Seaton said "He was committed to being successful."

Three teenagers are currently being charged in connection with Isaiah's death. They allegedly followed him after he got off a bus at the intersection of 44th Street and Rhodes Avenue SW. Police say that Isaiah was shot with a rifle.