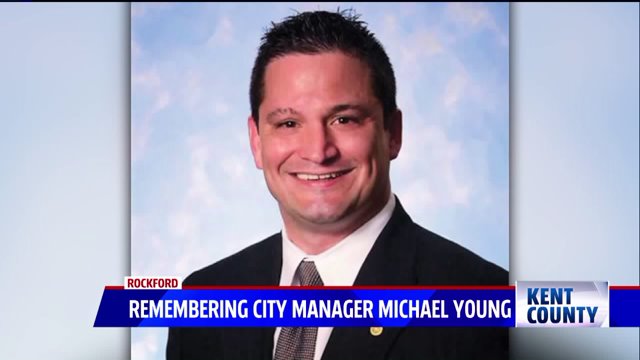 ROCKFORD, Mich. -- People gathered on the streets of Rockford and watched a procession led by multiple police departments. It was all in honor of longtime city manager Michael Young. He died suddenly last week after a stroke. He was 48.

His funeral was held this morning at Our Lady of Consolation Catholic Church.

Neil Blakeslee, Young's mentor and longtime friend, said it's difficult to think of any improvement in the city that Young didn't help make a reality.

"You quickly got to know who Michael was because there was just no facade to him. The real Michael was always right there. He had this wonderful smile and great chuckle that went along with it," Blakeslee said.

Blakeslee served on city council alongside Young's tenure as city manager. He said he vetted Young for the city manager position back in 1995. Young was 28 years old when he started. Since then, Blakeslee said Young's accomplishments ran the gamut. Anywhere from re-establishing the Rockford Community Foundation (Rockford Area Community Endowment), to being a driving force behind a new, multi-million dollar wastewater treatment facility, to the Healing Fields project commemorating 911 on the 10th anniversary and securing grants.

"What Michael brought under all these things was a tremendous pride on the part of all staff in Rockford. That staff has been there almost as long as Michael because he was a good man to work for. He was fair to people. He respected 'em. He gave credit to people that deserved credit. He was a special guy, and we were truly blessed to have him for the 20 years that we had him," Blakeless said.

Rockford Public Schools superintendent Michael Shibler said, "His focus was to make Rockford into one of the best cities anywhere."

Shibler considered Young to be a good friend and said the loving husband and father of three had great leadership over the city. He said Young's leadership impacted the school district in a positive way. Young had also served as one of the wrestling coaches at Rockford High School.

"And there were tough issues that the city's had to deal with over the last several years. But he has always taken the position, 'I'm going to recommend to the city council what I believe is the right thing to do, and I'll take the criticism,' that he might have received from some sections of the city on some controversial issues. But it was - in his mind - always the right thing," Shibler said.

A scholarship has been set up in Young's name at Grand Valley State University, the Michael F. Young ’90, ’94 Scholarship Fund.