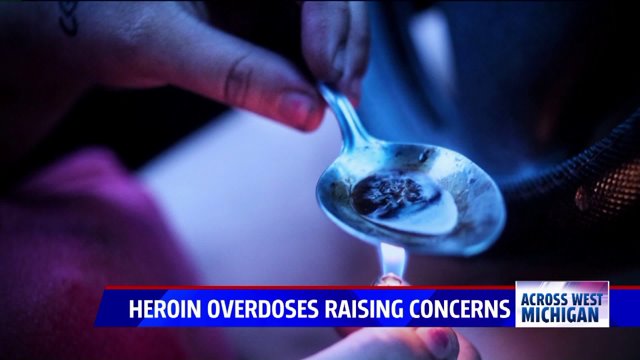 With heroin getting cut multiple times, police are worried the drug is getting mixed with a potent pain killer called Fentanyl, creating a toxic mix when the two are cut together.

"I mean we have to work on it from our end but it’s a community issue that will take a community to decrease the amount of overdoses we’re seeing and to get those addicted the help that they need," said Saxton.

Local non-profits like the Red Project has been helping educate addicts on HIV and Hepatitis prevention for years. You may have seen their mobile health unit making the rounds in Kent County. Red Project Program Manager, Brandon Hool, understands drug overdoses have become the company's main priority since 2008.

"The last 15 years in Kent County we’ve seen a six-fold increase in overdose death, so a huge increase," said Hool. "Nationally, overdose has increased three-fold, so we’re higher than the national average. Michigan is one of the 16 states where drug overdoses kill more people than car accidents. It’s the leading cause of accidental death in this state and in the country."

The Red Project now educates their clients on how to identify drug overdoses and pass our sterile syringes during their visits. They've also been passing out the anti-dote for drug overdoses since 2008, Naloxone Hydrochloride, a miracle drug now aiding local law enforcement in their fight against overdoses.

"It's really simple, we’re using the nasal spray," said Saxton. "I’d like to say its cop-proof, we can’t mess it up."

The Red Project reports 288 overdose reversals since 2008 through education and the help of Narcan.