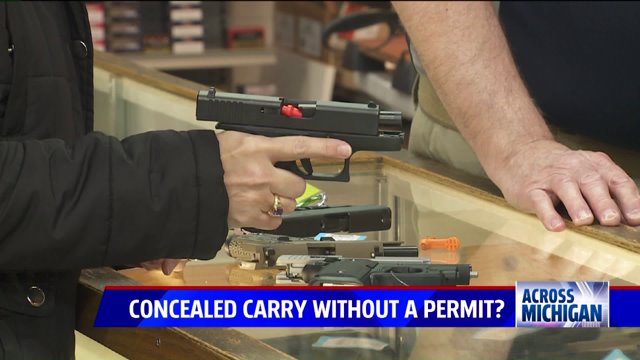 LANSING, Mich. — Gun owners might soon be able to carry a concealed pistol without having to get a government-issued permit to do so under new legislation proposed this month.

The 'Constitutional carry' legislation introduced by Michigan House Republicans would allow "law-abiding" citizens 21 years or older to carry a concealed firearm without a permit.

“Many people don’t realize right now, it is perfectly legal for any legal gun owner to open carry in all parts of Michigan, unless it is in a pistol-free zone," said Rep. Triston Cole, R-Mancelona, one of four Republicans who co-sponsored the package of bills.

"What changes when they put a jacket on?”

Cole contends the state's current Concealed Pistol License, or CPL, permit mandate is  "pure government over-reach," adding the changes would not make it any easier for criminals to get their hands on guns.

“People are getting excited about the idea of more people concealing handguns, well this isn’t going to allow more criminals to do that," Cole said. "This is about legal gun owners having more freedom and ability to carry their firearms.”

Under the proposal, penalties for the unlawful possession of a gun will remain in place and gun owners still have to pass a background check, he said.

But safety training courses currently part of the permitting process would no longer be mandated.

"Just owning a gun does not mean you’re protected, anymore than owning a guitar makes me a musician," said Mike Visser, the lead instructor for firearms training at Silver Bullet Firearms in Wyoming.

Visser, a staunch proponent of gun ownership, said it's crucially important to know how to properly and safely use a firearm, which is why he currently teaches six CPL permitting courses per week with anywhere between four to seven students in each class. He said he's booked through next month.

“The course goes well beyond just knowing how to use the gun, because to get through the Michigan concealed pistol permit course, you do have to be a proficient shooter," Visser told FOX 17.

But even Visser admits he can understand both sides of the argument, questioning whether the state should mandate gun owners spend hundreds of dollars on training and permitting for what he considers a Constitutional right.

“It does really get very sticky because you have one side of the argument saying we want people to be trained on this stuff, and the flip side to this is you’ve got the Second Amendment here," he said.

Six other states—Alaska, Arizona, Arkansas, Kansas, Maine and Vermont—currently have Constitutional carry laws on the books.

Changing the law would not stop the state from being able to issue CPL permits and guns owners would still be able to complete training and certification courses. It's something Cole said he encourages every gun owner to do, but contends it's unfair to mandate it.

"This isn’t something about gun nuts in Michigan going wild with carry, this is something other states have done and again, the sky has not fallen," he said.

This latest proposal follows changes made in December to how concealed carry permits are approved in Michigan due to the elimination of county gun boards .

A committee hearing for the legislation has not yet been scheduled.