4 hurt in shootings outside Muskegon Heights High School, including 2 students 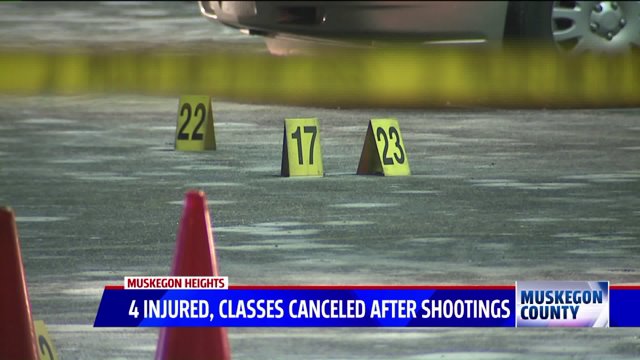 The school district tells us that two of the victims are Muskegon Heights students.  All four victims have been treated and released from the hospital.

We are sickened by the acts of violence that occurred outside of our school building last night. We are saddened that two of our own high school students were injured. However, we do not know what their current condition is. We will do everything we can to assist these students and their families.

While classes are cancelled today, we will open the high school at 10:00 a.m. to our students and staff. Crisis response teams will be available until 1:00 p.m. today, and throughout the rest of the week as needed.

It is important to know that media will not be allowed in our parking lots until 3 p.m. when I will make a public statement outside the main entrance of the high school.

Our students are our top priority right now and our number one focus. Because of this, I will not be speaking to media until 3 p.m.

Finally, our hearts and thoughts are with all those involved. We will continue to cooperate with law enforcement as the investigation continues.

You can read the complete letter sent home to parents here : Parent Letter

Student safety is and always will be a top priority. Before the game, we were made aware that there was a potential issue involving a few individuals. We took extra precautions to ensure our student athletes’ safety, including bringing additional public safety officers and administrators. All three basketball games were played without incident. Following the game, the student athletes were escorted to their busses by staff and safely transported home

We also coordinated with Muskegon Heights Public Schools, who worked with Muskegon Heights Police Department, Muskegon County Sheriff’s Office, and Michigan State Police, to ensure that we had additional security measures in place, as well as an increased police presence. The individuals were identified and were not allowed access to the premises. As a result, they took their dispute to a nearby location and made the incredibly poor decision to allow it to escalate into violence. Our thoughts are with those who were injured, including two Muskegon Heights students.

Precautionary measures were taken prior to tonight's basketball game according to Chief Thomas, including having officers from the Michigan State Police and the Muskegon County Sheriff's Department in the area.

"Between the Muskegon Heights Police Department, The Sheriff's Department and the Michigan State Police, we did everything we could to stop this from happening," said Chief Thomas.

One of the two shooting incidents, which happened in close proximity to one another, includes a deputy-involved shooting, which is now under investigation by the Michigan State Police.

"We know for a fact that a least one person was armed with a weapon, with a firearm, confronted the deputy, refused to comply with the orders to surrender the firearm, and the deputy responded accordingly," said Muskegon County Sheriff Dean Roesler.

"This could have been a very tragic situation.  We could have had a lot more injuries, we could have had a lot more issues to deal with if we had not responded in the matter we did," Roesler said.  "The Sheriff's Office will be conducting an internal investigation to review the deputies' actions, but from all the information that I've been given and what others have told me, at this point, it appears the deputy acted within policy and state law."

The deputy involved in the shooting wasn't injured.  Initially, authorities reported 3 people had been hurt in the incidents, later finding a fourth person who'd been injured while canvassing the surrounding area.  The injured people include two males and two females.

Chief Thomas says some of the suspects involved in Tuesday night's incidents are now in custody.  Names of people involved in these incidents haven't been released.

Schools were closed on Wednesday and counselors are being made available from 10:00 a.m. to 2:00 p.m. for any students or faculty who may want to discuss what happened.