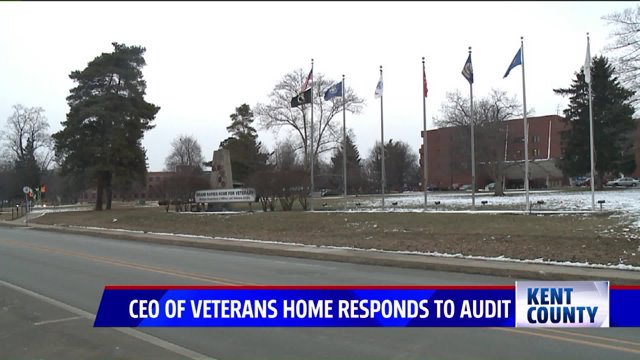 GRAND RAPIDS, Mich. -- A state audit says workers at the Grand Rapids Home for Veterans falsely claimed they were checking on patients after being alerted of possible falls, failed to properly investigate allegations of abuse and neglect, and took too long to fill prescriptions.

The veterans home also continued with inadequate staffing levels even as the state filed four complaints against the contractor hired to supply nursing aides.

Auditors used surveillance video to show only 47 percent of bed checks and 33 percent of fall alarm checks were done, even though the home had produced documentation that the checks occurred.

CEO of Michigan Veterans Health Leslie Shanlion said that there have been decades worth of complaints with the Grand Rapids Home for Veterans. She was appointed to the position in October, just as the auditors were wrapping up their investigation, and says that going in she knew things weren't good.

"The audit reflects a lack of leadership, a lack of current policies, procedures, and training, and a lack of accountability," Shanlion said.

The audit was made public Thursday, a day early, after Rep. Holly Hughes, (R-Montague) called the findings "very disturbing."

She said in the statement that the "mistreatment of our nation's heroes is unacceptable and must be stopped."

The investigation by the Auditor General has been worked on for two years.  Hughes tells FOX 17 that she was made aware of the report Wednesday afternoon and has just seen a preliminary report.

Hughes calls the investigation very detailed and there will be reports of "abuse, neglect and mishandling of things, that it's just deplorable."

"We will get to the bottom of this and demand accountability from the people responsible, whether that be further inquiry, reprimands or job termination," Hughes said in the release. "Our veterans deserve the best possible care and we'll examine what needs to be done to keep that promise to them."

The Michigan Veterans Affairs Agency says it is making changes to comply with auditors' recommendations.

“Holly Hughes saying she’ll get to the bottom of the mistreatment of Michigan’s veterans is the height of hypocrisy,” said Brandon Dillon, Chair of the Michigan Democratic Party in a press statement.

“If she wants answers and accountability from the people responsible for the horrendous conditions at the Grand Rapids Home for Veterans, she needs to look in the mirror. Her vote, in 2011, for the budget that cut $4.2 million from the Grand Rapids Home for Veterans and privatized the care of our servicemen and servicewomen is what caused this crisis of neglect for Michigan veterans. If Hughes wants to contribute to the solution this time, instead of the problem, she should demand that this contract be canceled and the dedicated employees who served our veterans for so long be brought back. It’s time for this experiment on our veterans to end.”