Couple called 911 to report Uber driver prior to shooting spree 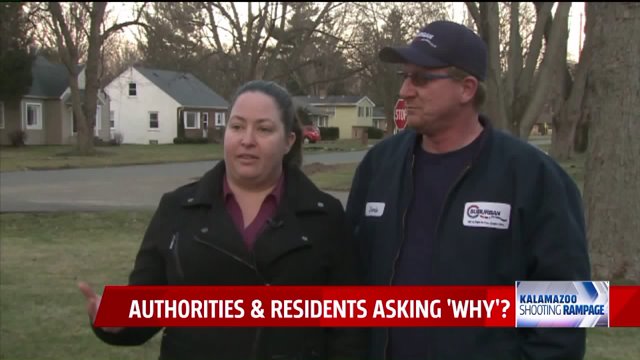 Jamie and Kacey Black say they saw a man hop out of the car in front of their home near Iroquois Trail and Nichols Road Saturday afternoon.   The man told them the driver wasn't letting him out and was driving erratically.

The couple said they contacted 911 to report the incident, but say their call wasn't taken seriously.

"I felt like they didn't believe me.  They just kind of laughed at me," Kacey said.

Kacey said when she turned on the news Sunday morning after the shooting spree, she recognized the car that left the black skid marks in her road at about 4:30 p.m. the day before.

A social media post Saturday evening identifies Dalton as an Uber driver who was driving erratically in Kalamazoo in the time just before the shootings started.

Police say Dalton's shooting spree began at about 6 p.m. Saturday evening at Meadow Townhomes, where one woman was shot and sustained serious injuries.

Four of those people died.  A 14-year-old girl is currently hospitalized with critical injuries.

Dalton was arrested at about 12:40 a.m. near Ransom and Porter streets in Kalamazoo.    He's currently lodged at the Kalamazoo County Jail and is expected to be formally charged Monday in connection with the killings.