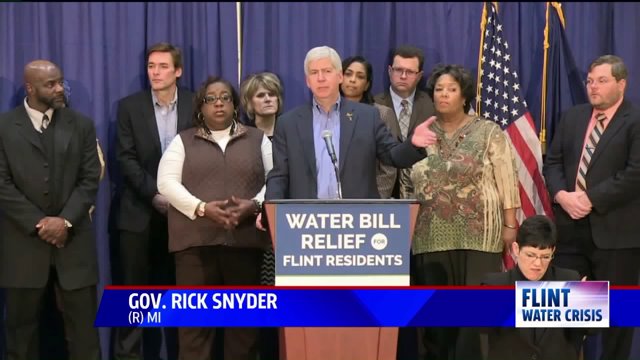 LANSING, Mich. (AP) — Two lawyers in Gov. Rick Snyder's office urged his top aides to switch Flint back to Detroit's water system only months after the city began using the Flint River, according to emails.

The Detroit Free Press and The Detroit News report Friday that Valerie Brader and Mike Gadola expressed concerns about Flint's water in October 2014, citing E. coli and General Motors plant's switch because the water was rusting engine parts. It was a year before the state helped Flint return to Detroit's system after water leached lead from pipes into homes.

In emails to then-chief of staff Dennis Muchmore and others, Brader said it was an "urgent matter to fix." Gadola, Snyder's then- legal counsel, called the idea of using the Flint River as a water source "downright scary."

The Detroit News also reports emails showing the governor's communication staff was aware of a Legionnaire's Disease outbreak as early as January of 2015, though Snyder has said he did not learn of this until 2016.

Snyder released thousands of pages of additional emails Friday, and later in a press conference said he plans to release all emails pertaining to Flint's water supply since he took office.

Friday he signed a $30 million water relief bill to pay 65 percent of Flint residents' water bills from April 2014 until the water is deemed safe in the future.

At this press conference reporters repeatedly asked Snyder whether he knew of these major red flags and concerns, to which he said he could not recall specific concerns from Gadola, and "all the dots were not connected," and said this was a cultural issue they are fixing.\

“There were red flags here, in these emails if you look at it, and beyond emails," said Snyder. "We didn’t connect all the dots that I wish we would have. And again, that’s where we’re having to address that, that’s part of the cultural thing I want to address longer term within state government, and government in general."

When asked if he was asking enough questions early on, as these concerns were allegedly reported he said:

“That’s where I’m kicking myself every day. I wish I would have asked more questions, I wish I wouldn’t have accepted answers. So that’s the whole point of this thing is, I’m not going to have that happen again. And again, that’s the point about having urgency, asking the questions now, designing reports saying just because you tell me something let’s make sure we validate it, let’s go through that process.”

Meanwhile, there are further calls to Snyder to resign, including from Progress Michigan and Michigan Democratic Party Chair Brandon Dillon.

Snyder said partners will be working with the city of Flint during the next couple weeks to determine how to roll out the $30 million water bill relief plan.