Regulations on medical marijuana could generate up to $63M annually, report says 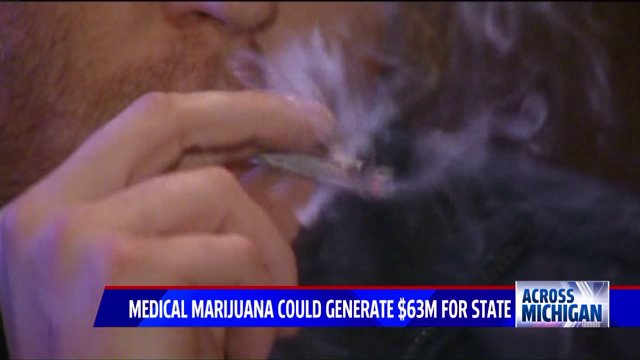 LANSING, Mich. — Sales from medical marijuana could generate up to $63 million a year in new revenue for the state under proposed regulatory reforms, according to an economist's findings published Monday.

“It will create a robust economy in the sense that it will make a safe place for people who currently have registration," Wolfram told FOX 17, calling his predictions conservative.

The report's findings are based on legislative reforms aiming to change and clarify Michigan’s vague medical marijuana laws. Under the proposal, medical marijuana dispensaries would be taxed at three percent while patients would pay the state's standard six percent sales tax.

The report assumes that of the 182,091 current medical marijuana patients in Michigan as of 2015, according to the Michigan Department of Licensing and Regulatory Affairs, two-thirds would buy from a licensed dispensary to generate $44.3 million annually.

If 80 percent of registered patients purchased medical marijuana from a licensed retailer, the revenue would exceed $52 million, according to Wolfram's analysis.

“It’s certainly a good number, if you’re a state rep. trying to balance the budget right now dealing with Detroit Public Schools or Flint, whatever the latest problem is right now," he said. "An extra $40 to $60 million would certainly be helpful.”

However, recent, stricter regulations written into these bills stuck in the Senate have prompted push back. A proposed tiered licensing system for growers, distributors, and retailers—similar to how alcohol is regulated—could drive up prices, according to some patient advocates who've previously expressed concern to FOX 17.

But advocates of the amended bills, like Michigan Cannabis Development Vice Chair Willie Rochon, argue the reforms will increase competition and drive down prices while increasing access for patients.

“In this state we need safe regulation, we need much-needed revenue for our schools and communities and we need safe access for our patients," he said, adding he believes the state will actually see double the new revenue projected by Wolfram.

A future vote in the Senate on the amended regulations remains unclear.

Marijuana Support Over Time | InsideGov
Copyright 2020 Scripps Media, Inc. All rights reserved. This material may not be published, broadcast, rewritten, or redistributed.