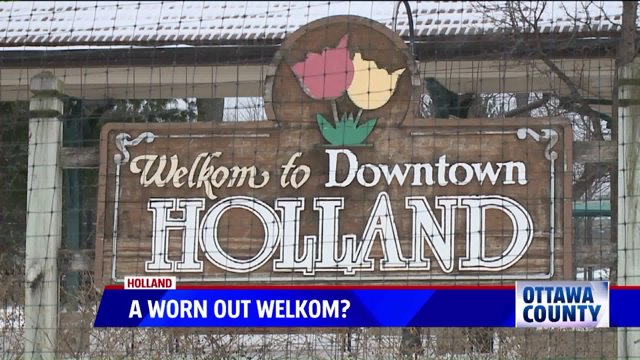 HOLLAND, Mich. — The iconic welcome signs of Tulip City will soon be coming down. In June of 2016 they'll be replaced with a new sign welcoming people to Holland without the traditional Dutch "Welkom".

Brian Burch, City of Holland Counsel Member explains, "We're changing the signs because the signs are old. They're abut 30 years old, they've been repaired multiple times and they're starting to show their age."

The city hopes the new signs will focus on a more modern and more inclusive Holland.

"There are a lot of people, myself included, who are not of Dutch heritage," says Burch, "The tulips and the windmills and the Russ' restaurant will stay the same, but we are a diverse community. The part of town I represent is heavily hispanic and they're bringing with them their ideas and traditions."

At first look, resident's walking through downtown Holland did not like the new signs.

Kelsey Hosner says, "I'm thinking it's a little bit modern and it's not very Dutch."

The new sign needs some explanation. The nod to Holland's Dutch history is a bit subtle. The color of the sign is orange, the color of Dutch royalty. The lattice work is meant to be a reminder of the neat lines of a tulip field. The sign's shape is a blade of a windmill.

Burch explains, "The blades of a windmill keep the windmill moving, they have these striations on them to capture the wind. So you have that motion and that energy coming through this design. That is we want people to come in and experience."

After hearing what the new design is all about the residents we spoke with liked it and thought it represents their more diverse community now, but also shares their heritage with visitors.

"I think it's more subtle to our heritage, but less prominent to the reality of our community," says Holland resident Jon Brown.

We also stopped by the La Consentida Supermerket in Holland, and even with the new description resident's were not as excited about the new design.

"I like the old Dutch style, because it's traditional," explains Fernando Barajas, "it's just nice, the old one with welcome how it's spelled...kind of like when you go to Deboer's it's old, traditional Dutch, it's unique, it's different."

Holland resident Rogelio Cruz echoed, "It's a unique sign and you know it's a heritage of the Dutch people."