Cast of “Underground” talks with FOX 17 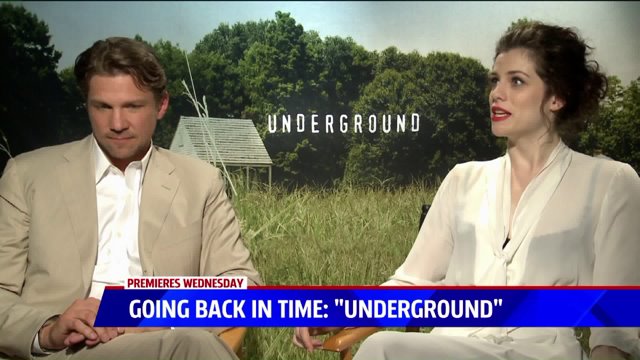 WGN America's newest drama "Underground" premieres this Wednesday, March 9 at 10:00 p.m. It's a re-imagining of the story of the Underground Railroad, focused on the efforts of a group of slaves in Georgia as they attempt to trek more than 600 miles to freedom.

"It's an American story," actress Adina Porter told FOX 17 shortly after filming wrapped in August. "We Americans…if we don't like something, we change it! We just do -- and the rest of the world is just shocked and amazed that we actually do it and make it happen."

"It was important to tell (the story)," actor Aldis Hodge said. "I mean, how many times have you heard about the Underground Railroad and the true events that took place?"

"I think there's a real sense and a spirit of revolution in our generation of all colors to not accept what society is giving us and to say that we matter," actress Jurnee Smollett-Bell added.

Chris Meloni, whose roles in "Law & Order: SVU" and "Wet Hot American Summer" have made him one of the more recognizable names working on "Underground," didn't hesitant to praise the experience of working on this project.

"It is a ranking experience," he said. It's definitely top three (of my career.) I knew it was gonna be great the moment I read the script."
"Each script, each episode, the journey just got deeper and more profound and complex. Just complete…that sense of fulfillment."

With a modern shooting style and soundtrack, the look and sound of "Underground" is unlike most historical programs.

The pace and intensity of the show also separates it from other like period pieces.

"This beat that is pounding, so your heart should be going along like this the whole time and it should be moving," actor Alano Miller said. "It shouldn't be drawn out - no, no. You should be scared the whole time because you don't know what's gonna happen next."