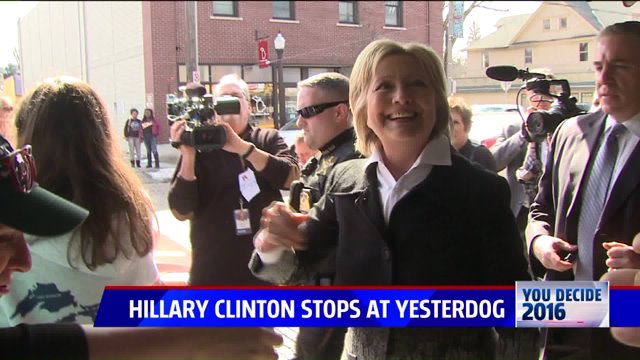 She seemed impressed with the company's commitment to equal pay and substantial paid leave for employees, which are issues she has highlighted in her campaign.

The former Secretary of State went on to say she believes the best and fastest way to create jobs is to incentivize companies to build more jobs in infrastructure and manufacturing.   She focused on her push to create more jobs with higher wages, something she calls her New Bargain to regain the American dream.

“We’ve got to first of all create more good jobs, and I think the fastest, best way is more jobs in infrastructure, more jobs in manufacturing, and I’ve got incentives that sort of switch the way it works now," said Clinton. "Instead of incentives which you still get for moving jobs overseas, more incentives for growing them and keeping them here.”

The idea is to impose an exit tax on any businesses that would move their headquarters overseas, and then use that money to fund job growth in the United States.

Following this point in the discussion, Clinton spoke of the need for affordable, "debt-free tuition," though not free like her opponent, Vermont Sen. Bernie Sanders.

"Part of my plan is to work with colleges and universities to really scrub their costs, and to make it clear that they can’t be adding onto to tuition bills costs that students don’t see as directly contributing to their degree," said Clinton.

"In some of the big state colleges and universities students, whether you care or not, are charged maybe $600 that goes to the athletic department. At some point, that is just not sustainable," she said.

Though citing some differences between she and Sanders, namely his vote against the Detroit bailout of the Big Three, Clinton called for Democratic unity in such an "unusual election."

“We have differences but those differences pale in comparison to what we seeing going on among the Republicans right now," said Clinton.

"I’m interested in results, they’re interested in insults, and they’re becoming quite masterful at delivering them, which I think is bad for the country. The kind of bluster and bigotry and bullying that we’re seeing is a terrible example for leadership, it’s a bad example for kids.”

After her stop at Atomic Object, Clinton visited Yesterdog for lunch.  She will be in Detroit Monday evening to hold a rally.