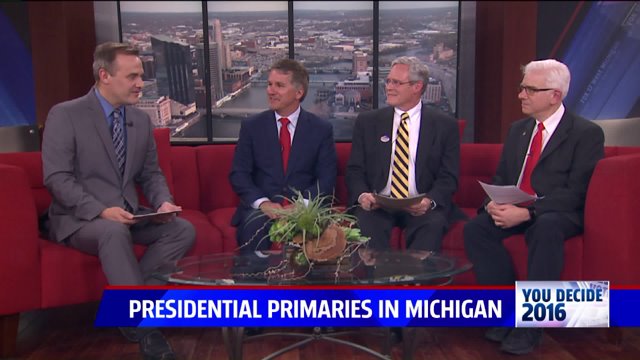 LANSING, Mich. (AP) — Republican Donald Trump and Democrat Hillary Clinton looked to pad their leads in Tuesday's primary contests in Michigan and Mississippi, eager to turn their attention toward a general election fight for the White House.

Trump is facing a barrage of criticism from rival candidates and outside groups desperate to block him from becoming the GOP nominee. While the real estate mogul holds a solid lead in the delegate count, his recent losses to Texas Sen. Ted Cruz have raised questions about his durability and have given fresh hope to other competitors.

Ohio Gov. John Kasich tried to mount a strong challenge to Trump in Michigan, Tuesday's biggest prize. Kasich has yet to win a primary but hoped a good showing in Michigan would give him a boost heading into next week's crucial contest in his home state.

Speaking to a crowd in Lansing, Kasich said a strong showing in Michigan would show the country "that it's a new day in this presidential campaign."

To that end, Kasich and Florida Sen. Marco Rubio were using recorded phone calls from Mitt Romney to appeal to voters as they headed to the polls. Romney, the 2012 GOP nominee, has not endorsed a candidate but has vowed to help challengers to Trump, who he says would be dangerous for the country.

Idaho and Hawaii also held Republican contests. GOP candidates were fighting for 150 delegates, while 179 Democratic delegates were at stake in the party's two primaries.

The economy ranked high on the list of concerns for voters heading to the polls in Michigan and Mississippi. At least 8 in 10 voters in each party's primary said they were worried about where the American economy is heading, according to early exit polls conducted for The Associated Press and television networks.

Among Democrats, 8 in 10 voters in both states said the country's economic system benefits the wealthy, not all Americans.

Sanders has sought to tap into that concern, energizing young people and white, blue-collar voters with his calls for breaking up Wall Street banks and making tuition free at public colleges and universities. Michigan, with big college towns and a sizeable population of working-class voters, should be a good fit for him. But Clinton has led in polling.

After a shaky start in early voting states, Clinton has pulled off commanding wins in states with large black populations, underscoring her strength and the limits of Sanders' appeal.

Tuesday's contests are a prelude to next week's high-stakes primaries in Florida and Ohio. Like Kasich, Florida Sen. Marco Rubio must win his home state in order to remain a viable contender.

Rubio has received endorsements from a steady stream of senators, governors and other high-profile Republican officials. But his backing from voters has lagged, and he entered Tuesday's contests with just a pair of victories in the Minnesota caucuses and Saturday's Puerto Rico primary.

If Rubio and Kasich can't win at home, the GOP primary appears set to become a two-person race between Trump and Cruz. The Texas senator is sticking close to Trump in the delegate count and with six states in his win column, he's arguing he's the only candidate standing between the brash billionaire and the GOP nomination.

During a stop at a catfish restaurant on Monday in Mississippi, Cruz said the current vacancy on the Supreme Court means Republicans can't take a chance on Trump.

Some mainstream Republicans have cast both Trump and Cruz as unelectable in a November face-off with the Democratic nominee. But they're quickly running out of options and are increasingly weighing long-shot ideas such as a contested convention or rallying around a yet-to-be-determined third-party candidate.

Heading into Tuesday, Trump led the Republican field with 384 delegates, followed by Cruz with 300, Rubio with 151 and Kasich with 37. Winning the GOP nomination requires 1,237 delegates.

Among Democrats, Clinton had accumulated 1,134 delegates and Sanders 502, including superdelegates. Democrats need 2,383 delegates to win the nomination.