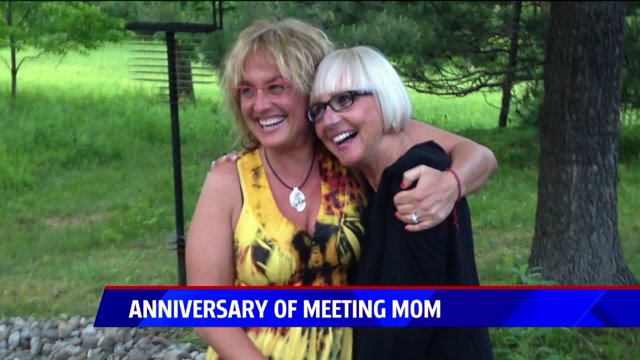 GRAND RAPIDS, Mich. – It’s been one year since a Grand Rapids woman was given access to her birth certificate for the first time, and it was the key to an incredible reunion with her birth parents.

Friday marks the one year anniversary of Ohio unsealing its adoption records from 1964 through 1996; legislation impacting families and adoptees worldwide. This weekend families are gathering in Westlake, Ohio to celebrate “Ohio’s Opening Day.”

FOX 17 spoke with Curry VanEe sitting alongside her birth mother Friday, asking if she thought this reunion would be possible:

“No, never,” said Curry VanEe. “It’s been an extraordinarily positive experience to find both my birth parents alive, healthy.”

Last March FOX 17 spoke with VanEe, who stood with hundreds lining the Ohio Department of Health Vital Statistics Office to apply for her birth certificate. She said, “I never thought this day would come, and it`s just extraordinary.”

“When I first reached out to Maret she said, ‘you must have a million questions and I’ll gladly answer every one,’” said Curry VanEe.

“What struck me the most was just how open-hearted she was to receiving me, but then I thought that’s who I am too.”

Last May, Curry VanEe reunited with her birth parents, sharing a photo of a hug that began to answer a lifetime of questions.

“It was just incredible, my heart just was overwhelmed with joy,” said Headley.

“I love Erica so much, she’s just an amazing person, I knew that before I met her.”

Then Curry VanEe met her four siblings, then extended family.   She traveled to relatives and traced her ancestry to Germany.

Last fall she said her birth parents met her adoptive parents and family.

“I feel like I got the gift of four parents: my mom and dad that raised me and did a phenomenal job and provided so much for me, and my birth parents that gave me this genetic predisposition and so many gifts as well,” said Curry VanEe.

“It’s been just an amazing, amazing journey of discovery.”

“It still has a feeling of being surreal,” said Norris.

“This has been so powerful here in Ohio, and it can be a positive case study and open up records to so many people.”

Now she and Curry VanEe are pushing for unsealed adoption records nationwide starting with Michigan.

“It’s birthed a new life purpose for me to see this happen for more people in more states around our country starting with Michigan,” said Curry VanEe.

“I’m really fired up and I want to have this experience happen for other people, regardless of their outcomes are, just like  I shared last year, everybody has a right to know where they came from.”

To begin the conversation, organize, or find resources Norris and Curry VanEe ask that anyone join the Facebook group, Ohio Adoption Search and Reunion.