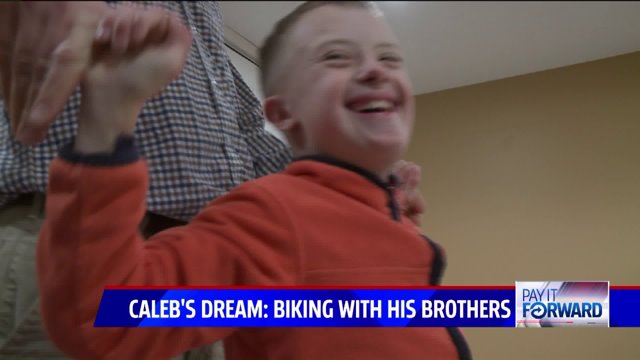 KENTWOOD, Mich--A family from Kentwood is asking for your help, hoping to fulfill a child's dream.

A 9-year-old boy with autism, wants nothing more than to ride side-by-side with his brothers, hoping to win a bike that will fit his needs.

It's a project of Friendship Circle that makes adaptive bicycles for children with special needs.

"He was born with Down syndrome, but we found out in our last few years he’s also autistic and nonverbal so for him to express his needs and wants it’s sometimes a challenge," said Ray Zondervan, Caleb's dad.

Although Zondervan was in first place for a while, someone else has since snagged the lead. Now, he needs your help in winning a bike.

"His two younger brothers learned how to ride their bikes the past two summers," said Robin, Caleb's mom, adding that Caleb desperately wants to join. "He loves anything that goes really, really fast.

His parents describe him as a kid with a need for speed.

"He’d really love to get out there join his brothers, join our family and be able to get outdoors in a different way not just walking or taking a stroll around the neighborhood," Robin said.

An adaptive bike would help Caleb get around with his brothers, the problem is the price.

"He’s such a special gift to be around, so we’d really love to have this gift to give back to him," Robin said.

Friendship Circle's Great Bike Giveaway runs through March 30th until noon, so make sure to get your vote in before then.

There is a spot to donate on the page, but you are not obligated. Donations do go towards giving even more kids bikes.

Right now, Caleb is up against 600 kids across the country.