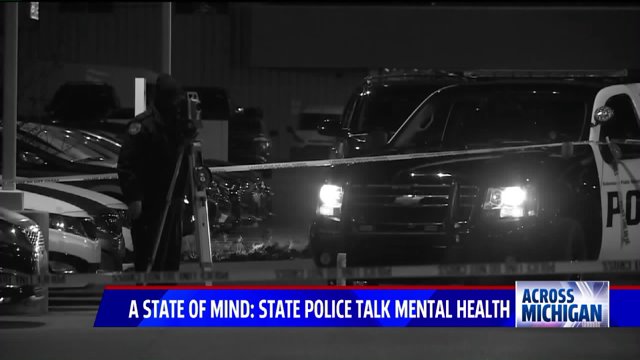 GRAND RAPIDS, Mich. — Whether dealing with anxiety, depression or post traumatic stress, it's likely you're not alone. But for some, talking about it is easier said than done.

That's why Michigan State Police is teaming up with the local non-profit Hope Network, in the hopes of starting a conversation about mental health.

"I think there’s so much involved when you talk about mental health but I think society often has a stigma attached when you mention mental health," said D/Sgt. Karl Schmitz.

According to Hope Network, one in five people in the U.S. will suffer from some form of mental illness in their life.

Some of those people are our first responders, many of whom say it's hard to focus on their well-being when their days are dedicated to saving other people's lives.

Whether they're dressed in blue, or brown, they're all equipped with a duty belt, badge and bulletproof vest.

Yet, no amount of armor can shield an officer from tragedy or heartbreak on the job.

"The majority of police officers, when they see these type of things they don’t need special treatment, they don’t need to go to a doctor, they just have to learn how to deal with it in their own ways," Schmitz said, adding that sometimes that's easier said than done.

"A lot of times the pressures or the stresses we run into in those situations we carry with us when we leave," he said.

Schmitz remembers a call he says tore his heart apart, when he responded to a scene in Muskegon County where a little boy was killed by the family dog.

"I remember specifically looking around that bed and looking at the faces of the nurses and doctors and it was very easy to tell which ones had children at home and which ones didn’t," he said. "I currently have four kids at home and I can’t imagine that being my child."

Whether police are faced with tough decisions or tragedies, Schmitz said it all adds stress to their everyday life.

"We have issues at home, we have people that are struggling with money and divorce and alcohol, gambling, you name it, we have the same problems everyone else," Schmitz said.

Not many see what first responders do on a daily basis, or know what it's like to lose a partner in the blink of an eye.

"They feel guilty because why wasn’t it me or they don’t understand things that are going on in life," he said.

"As an organization as a community we owe it to the police officers that are struggling to get them help as well," Schmitz said.

It's a plan they're calling 2.8. It focuses on improving employee wellness in the areas of health, nutrition, physical fitness, safety, emotional well-being and preparedness.

One way they're hoping to get the word out is by partnering up with Hope Network, starting a conversation on mental health.

"We really want to emphasize that people don’t need to be alone in their journey with mental illness, said Melissa Werkman, the Director of donor relations at Hope Network.

In May, MSP is taking their plan one step further by taking part in the "One in Five Marathon Relay" at Millennium Park.

It's scheduled for Saturday, May 28th and costs $175 to register through March 31st.

Teams of five are required to sign up. The first four runners will each complete a five mile loop and the last will represent that "one in five" statistic by taking on a more challenging 6.2 mile route.

You can sign up for the relay by clicking here.

All of the money raised will go toward Hope Network's mental health services across the state.