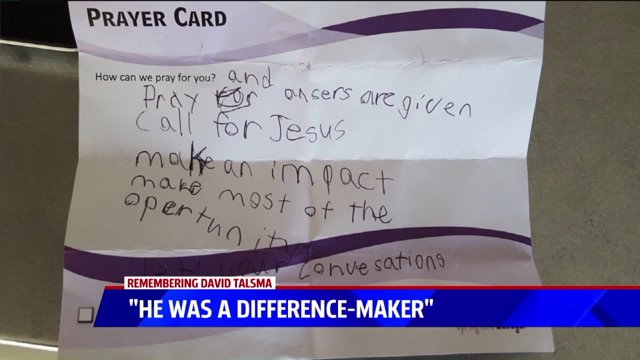 HUDSONVILLE, Mich. -- As the parents of crash victim David Talsma celebrate what would have been his 14th birthday, they continue to raise awareness about distracted driving.

David Talsma was killed last Aug. 3 in a distracted driving crash on I-196 near Hudsonville.

Now David's father Jason Talsma said their family is urging anyone behind the wheel to drive safely, an important reminder for "Distracted Driving Awareness Month" in April.

The Talsmas are working with the state to organize seminars with Hudsonville schools later this month to promote distraction-free driving.

Travis Fox, the driver who struck the vehicle Talsma was riding in, pleaded guilty Nov. 17 to a charge of moving violation causing death and was sentenced to 18 months of probation.

He told Ottawa County deputies that he was eating a sandwich while driving when he looked down at his GPS and then hit the car carrying Talsma.  Talsma's sister was driving that vehicle and was stopped in traffic while in a construction zone.  Nine other people were injured in the five-vehicle crash.

At Fox's sentencing last December, Jason Talsma gave Fox a bracelet that reads, "I AM a Difference Maker," which is a reminder of David's spirit.

“[David] was a difference maker, and he just took the time to seek kids who were kind of felt left out," said Jason Talsma.

David's strong and kind-hearted spirit continues to be his family's plea to end distracted driving.

“Even if it’s just not taking a look at that text, or saying I’m going to put my phone in my glove box, or put it away," said Jason "Those kinds of things are being a difference maker every day.”

With family gathering Friday to celebrate David's upcoming birthday, Jason said he found a special memento yesterday that was tucked into one of David's pockets: notes David wrote in church years ago writing, "make an impact," and "make the most of opportunities."

“In the notes were just words that the pastor had said that really related to who he was,” he said.

“It was really awesome to find that and to see that he saw these things and he put them into practice like a whole lot of kids struggle with.”

Recalling how David put into practice actions that showed his strong character, Jason and the Talsmas ask all drivers to show the same: to be mindful each time they get behind the wheel.

“There isn’t a day that goes by that I don’t think about David and the accident," he said.

“Be mindful of what you’re doing, you’re there to drive and all those other distractions can just be left for later.”