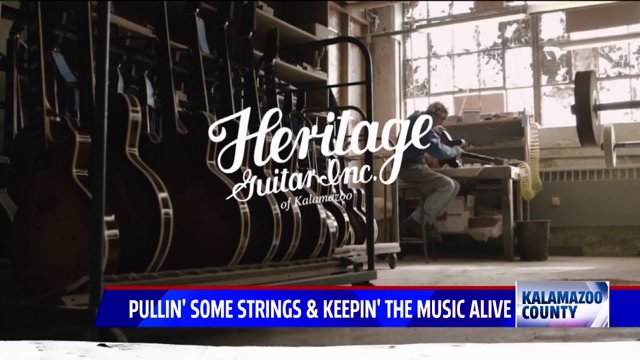 For 31 years, the same hands and machines that made Gibson guitars have been handcrafting high quality guitars from the old Gibson guitar factory at 225 Parsons St.

"We were trained by Gibson," Deurloo said. "1985, April fool’s day we started Heritage Guitar. Heritage is more than our name, it’s what we are. It's our livelihood and lives."

Gibson moved to Nashville, Tennessee in June of 1984. They held an auction where the trio purchased the remaining equipment which helped springboard their business.

"It helps tell a story and it’s a good story," said Paige. "In the industry people know how to tell it and they sell guitars by doing it."

After 31 years of manning the helm, the founders are stepping down from ownership of Heritage Guitar. Bill Paige said they've sold their company to a group of private investors, keeping the spirit of Gibson right here in West Michigan.

Kyle Sobko, Marketing Director for Heritage Guitar Inc., told FOX 17 that the group is led by private investors who have a long track record of revitalizing Kalamazoo-area buildings and businesses. Names of those involved weren’t released.

"It’s gonna be a younger group with a lot more financial backing and I think they’ll be aggressive, and bring a bright outlook for the company," Bill Paige said.

Just outside Heritage Guitar the 70-foot Gibson smokestack is slowly deteriorating, it's nearly 100 years old and in need of desperate repair. A Facebook fundraiser called, 'Save the Stack' is raising money to repair the rock and roll staple, hoping to save a piece of history that's revered around the Nation.