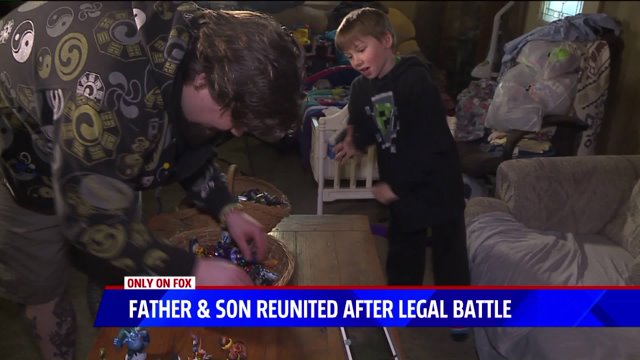 SPRING LAKE, Mich. -- After 18 months, a Spring Lake family's son is out of foster care and reunited with his parents.  Yet the fight to be together, through court battles and serious drug charges despite being card-carrying medical marijuana patients, still haunts them.

Thursday, Max Lorincz's son Dante, 6, picked out his favorite toys from a basket in the family's living room, handing one to FOX 17 saying, "this is my dad's favorite."

Piece by piece, Max and his family are putting their lives back together.

"It's like 100 pounds being lifted off my chest," Lorincz said. "It's like our entire life was put on hold the entire time he was gone."

Dante was ripped away from the couple after Max was charged with a felony for possession of "synthetic THC." Between family and criminal court cases, it's an experience they call hellish.

“It’s not something I’d wish on my worst enemy, the experience we went through," Lorincz said.

“[Dante] is 6 now, almost 7, you know he’s his own little person at this point. But before, he was just coming into his own, and we missed that entire portion of his life.”

It is a bizarre case FOX 17 first uncovered: the judge handling the criminal case ultimately threw out the charge 16 months later.

September 2014 it all started when police found a thumbprint of hash oil at Lorincz's home during an unrelated medical emergency. That lead to a felony charge for a charge the judge later ruled unfounded: possession of "synthetic THC."

Fast-forward 16 months, a judge drops Lorincz's felony. But the court battles continued in family court for Lorincz and his wife to regain custody of Dante for another two months against Bethany Christian Services.

Only FOX 17 cameras were in court for several permanency planning review hearings including last November during this exchange between Lorincz's Attorney Michael Komorn and the Bethany Christian Services caseworker:

"What is it, other than [Lorincz's] use of marijuana, that creates bad parenting?" asked Komorn of the caseworker.

She testified, "Marijuana is a psychoactive substance, and being under the influence doesn't allow you to be in the most clear mind for your child."

This woman was the third of five total caseworkers now in the 18-month family court case representing Bethany Christian Services. The agency threatened to petition for permanent removal of Dante from his parents.

In this November hearing, the judge already allowed Lorincz, a legal card holder, to continue use of medical marijuana. The caseworker here on the stand testified that marijuana, even legally used for medical conditions, may make an unfit parent. This was a sticking point in many of these permanency planning review hearings, but ultimately she testified BCS had no evidence to prove drug abuse.

Komorn continued to ask her, "One of the reasons for you to recommend the permanent removal is because of drug substance issues, am I right?"

To which the caseworker said, "Yes." Komorn continued with, "Ok, and we've already clarified that there are no drug substance issues at all regarding my client [Lorincz], am I right?"

Now, weeks later, another slap in the face for the Lorincz family: a billboard popping up several blocks from their home on 144th Avenue, with the face of Attorney Chris Wirth, who advocated for their son, working against them in their custody fight.

Lorincz and his family are moving on, but he continues to call for clarified medical marijuana patient rights in Michigan, for the medicine he says saved his life.

"2009 when he [Dante] was being born, he was born in Butterworth Hospital, I was dying of liver failure in Blodgett Hospital across town. It was due to my doctor prescribing too much medication," Lorincz said.

And the 18 months Lorincz spent legally removed from his son, he reminded, they will never get back.

“We’ll try and make as many positive memories as we can to make up the gap," Lorincz said. "But there’s definitely nothing that’ll replace the time that we lost, that’s for sure.”

The Lorincz's have started this GoFundMe page, asking for any help to cover their expenses at this time.