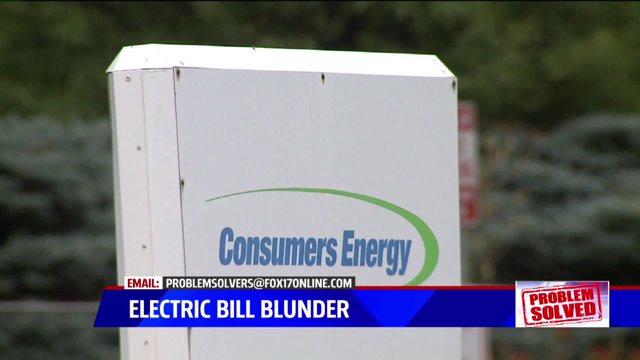 KALAMAZOO, Mich. — One man says he got a shock in mid-March when he opened his electric bill—there were a few more zeroes than usual. Jerry Bosse was charged $23,000 by Consumers Energy for a two bedroom home, and added he won't pay it.

“I flat out told them I will sell my house and move if I have to pay that kind of money on an electric bill. I only paid about $35,000 for my house,” he said.

Bosse’s story is only the latest in a string of complaints about Consumers Energy bills. On Thursday, FOX 17 Problem Solver Cassandra Arsenault investigated a business owner facing a $13,000 bill for a single month. Consumers claimed it was a billing glitch in their system.

In Bosse's case, he was hit double-time. Not only did he get charged with 14 months of estimated reads, but had a smart meter that's reading higher-than-normal usage. He said Consumers told him that it was reading $500 a month in electric usage.

“I am confident in the fact that I won’t be paying it,” said Bosse, adding that he's a hardworking business owner and father who's only looking to provide for his family.

Bosse said he got the outrageous bill two and a half weeks ago, and it gave him a scare. The price tag: $22,772 and some change. He said he immediately called Consumers, but was told his bill was estimated because of his dog, meaning meter readers weren’t actually going into his yard to check his meter. When the smart meter was installed, they charged him the difference for 14-months of estimates.

So Bosse called Consumers again to find a resolution. That's when they said they would lower the bill...to $8,000.

When Bosse saw our story about the business owner who got a $13,000 bill, he reached out to the Problem Solvers.

FOX 17 News reached out to Consumers Energy, who admitted there was something wrong...at least in this case.

“We recognize that repeated estimated billing doesn’t respect the standard of service that our customers want, expect, and deserve," said Debra McIntyre-Dodd of Consumers Energy, "Thanks to FOX 17, today we were able to reach out to the customer via phone and we are working with him to establish that payment plan . I know that he is reading higher than normal but we do have a rigorous meter reading program in place that protects our customers, and we are confident those meters are performing accurately."

“You can’t charge somebody and then just change your mind and say they owe 10 times more. I don’t think that’s how the world is working.”

Consumers is in touch with Bosse to find out if there’s something in his home causing these high meter reads, or if it’s his smart meter. We're continuing to follow this story, and will update if anything changes.