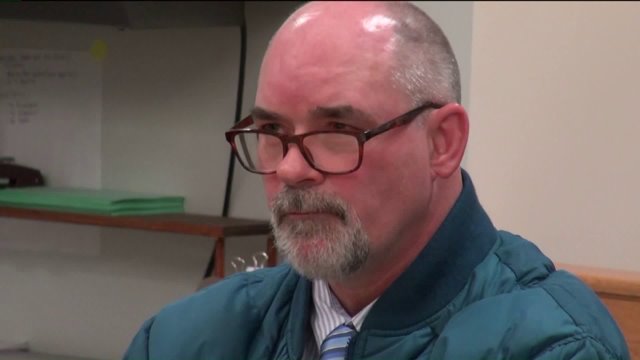 BATTLE CREEK, Mich. -- The man accused of shooting a dog and beating it with a bat said he was simply defending himself. Battle Creek Police said what 54-year-old David Hursley did was nothing more than cruel abuse of an animal.

Battle Creek Police Officer Craig Kidney took the stand Tuesday in Calhoun County District Court, saying that he knew something was wrong when he saw someone inside the home cleaning up blood.

"I saw another gentleman later identified as David Hill on his hands and knees wiping up the floor, later to be, cleaning up blood off the floor," said Kidney during the preliminary hearing.

Kidney said Hursley answered the door and told officers that his husky-mix dog was aggressive and bit his friend.  Hursley then began beating the dog with a bat.

Kidney said when he saw the dog on the back porch and he immediately saw how lifeless it was.

"I opened the door, the dog immediately tried to stand up but it wasn’t able to," said Kidney. "It was whining heavily, very distressed. It was breathing but seemed very difficult to breathe."

He and other officers made the decision, Kidney said, to "put it out of its misery."

Defense attorney J. Thomas Schaeffer argued that Hursley was defending himself and his friend. He said by law, Hursley had the right to hurt the dog.

"The statue is pretty clear," said Schaeffer.  "It's called Worrying Sheep statute which allows a person to kill, not to proportionately assault an animal but to kill an animal, if the animal, the dog, attacks a person and that's exactly what happened in this particular matter and that exactly what the testimony was"

The judge ruled that the case should go to trial.  Hursley is facing four years in prison if convicted.