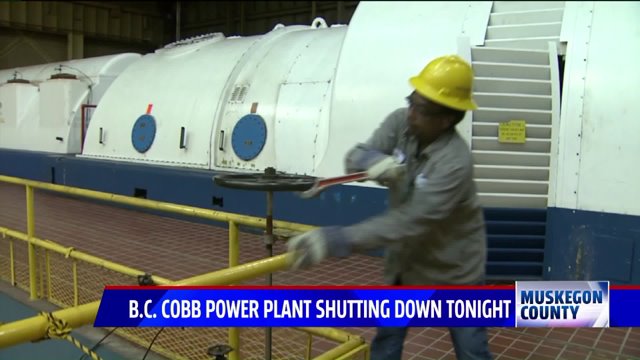 MUSKEGON, Mich. — After almost 70 years in service, Consumers Energy is preparing to shut down the B.C. Cobb Generating Plant along the Muskegon Lake. The plant began producing electricity back in 1948.

"Customers had a choice of investing very large sums of money that would of been ultimately born by our customers in some of our smaller older coal plants, what we elected to do is shut them down instead," said John Broschak, Vice President of Generation Operations at Consumers Energy.

The coal plant is one of an estimated 25 plants closing by the year 2020 due to changing EPA regulations.

"On the units we are keeping in operation, we are investing significant sums of money to reduce any pollutants coming out of those plants and meet all of the current regulations," said Broschak.

Procedures to completely shut down the plant are already underway. The output of the plant has been brought down to a 'minimum load'.

"Were down at a very low power level right now and they’ve made all of the preparations to very safely shut the unit down right before midnight," said Broschak.

Following the complete shut down, the facility will undergo a process called 'clean and dark'. Energy will be taken out of tanks, fuel and oil systems will be drained, and electrical connections will be disconnected.

Preparation for the building to be demolished will then be underway.

"We remove any asbestos or any building material that could potentially impact the environment and then we’ll essentially take it down to ground level," said Broschak.

There were 116 employees from the plant have either retired or been reassigned within Consumers Energy. With a rich history in the Muskegon community,

"Every person has been taken care of because we really believe that’s a core value of our company, to have this be a great place to work and manage these transitions in a very respectful way," said Broschak.

The 650 foot smokestack associated with the facility is the tallest structure in Muskegon County.